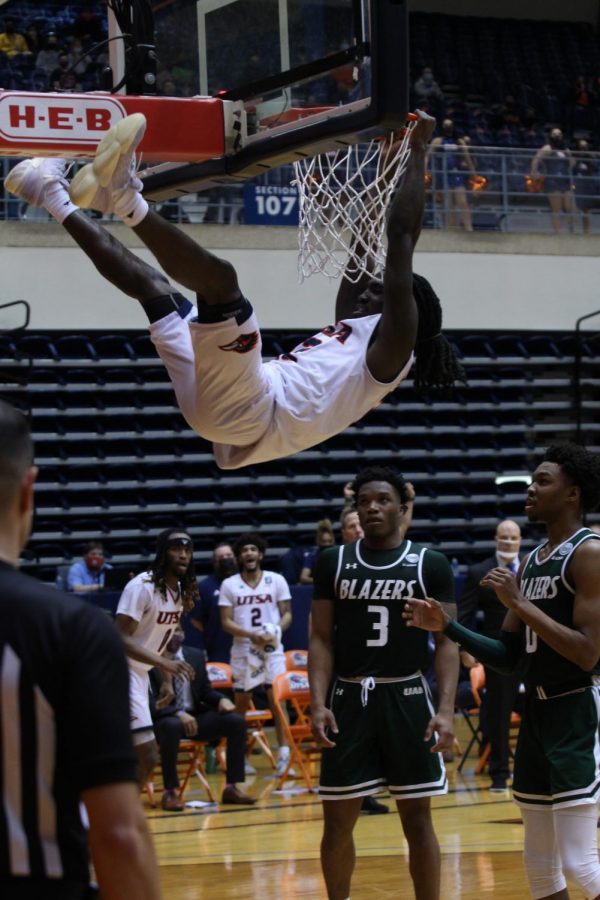 Keaton Wallace throws down a dunk during Friday night's loss to UAB. Wallace's performance over the weekend saw him cross the 2,000 point threshold and 7th place in all-time scoring in Conference USA history.

The University of Alabama at Birmingham (18-5, C-USA 10-4) started off strong in their first matchup Friday night, going on a 10-0 run within the first three minutes of the game. There were costly turnovers early that caused this deficit, and the ‘Runners looked to be in some trouble early.

Although there were many mistakes on both sides, UTSA managed to lead at the half. With some quick fixes to lineup adjustment and understanding turnovers were causing major problems. The ‘Runners went into the half up 28-27, and unfortunately, shortly after, would fall to another 10-point deficit. It seemed as the ‘Runners would let the game get away from them as they got closer to tying it. The runners would fall short 64-57 due to crucial missed shots and costly turnovers late. Although the ‘Runners had fewer turnovers than UAB, turnovers cost them the game. If it wasn’t enough to understand, the game ended off a UTSA turnover.

The UTSA offense struggled much of the night. However, Keaton Wallace did record a double-double scoring 22 points and grabbing 13 rebounds. The scoring behind Wallace, however, slowed drastically. The second highest scorer for the ‘Runners was Jacob Germany, who put up 13 points. Conference USA’s all-time leader in made field goals, Jhivvan Jackson, suffered through a rare cold-shooting night. Jackson ended the game with 12 points, his second lowest total on the season at home. UTSA’s all-time leading scorer shot 5-13 from the field and a cold 1-6 from beyond the arc. This was a strange performance as the senior had averaged 24 points per game in his last four appearances. Some would speculate the delayed week caused by the snow takeover might have slowed down Jackson. That would not be the case in the game on Saturday, Feb. 27.

In game number two against UAB, Jackson flipped the switch and exploded for 32 points, shooting 13-21 from the field and turning it on from behind the arc, going 6-10 from deep. In his final Conference USA home game, Jackson delivered a vintage performance. He led the ‘Runners with a season-high 96-79 victory running the Blazers off the court. Along with Jackson’s 32 points, he dished out five assists and grabbed three rebounds. His day put him in elite company. His career scoring now ranks second in C-USA history. He is now also 70th in NCAA scoring history and passed NBA Hall of Famer Elgin Baylor. Speaking volumes of the electric senior’s place in NCAA history.

When asked how his emotions were in a post-game interview, Jackson stated, “I’m just you know… I’m grateful for everything that the coaches have done for me and my teammates just trusting me”.

His teammate Keaton Wallace also reached new heights and has now become part of the 2,000-scoring club after Saturday’s game. Wallace humbly stated after the game, “Man you know, it’s just a blessing.” He almost repeated Friday’s performance with 22 points once again but not the double-double, finishing with seven rebounds. Jackson and Wallace remain integral to the ‘Runners success, especially when the duo combines for 50+ points. This is demonstrated in the stark contrast in results between Friday and Saturday’s games. What also helped dramatically change the result of Saturday’s game were players like Jordan Ivy-Curry, Eric Parrish, Germany, and Cedrick Alley Jr. showing up. Ivy-Curry and Parrish finished in double figures. Germany and Alley almost did the same, missing double figures narrowly with eight and nine points respectively. With the entire team contributing alongside the dynamic duo, the ‘Runners easily cleared 90 points for the game en route to a big win.

Jackson and Wallace closed out their Conference USA regular season careers in sterling fashion. These two have been through such a journey, and their stamp through the years here at UTSA will put them down as all-time greats. However, there are still more games to be played. Winners of eight of their last 10 games, the ‘Runners are printed to make some noise in the conference tournament. Their possible matchup will be the Charlotte 49ers (9-13, C-USA 5-9). The two were set to play a two-game series last month, but due to weather conditions, the games were cancelled. Whoever the opposing team may be, the ‘Runners seem confident they can take on anyone.