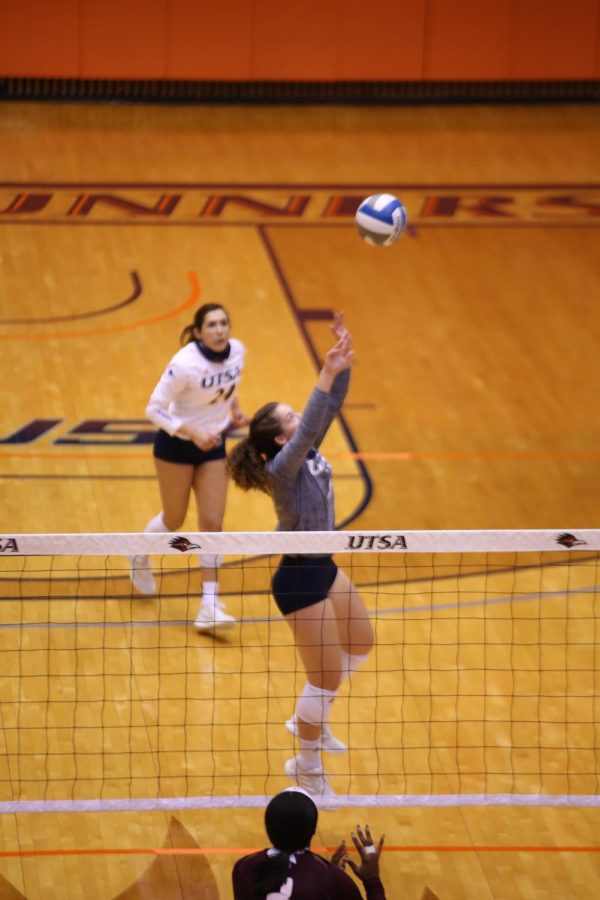 Courtney Walters tosses up a set during a game earlier this season. Walters recorded a team-high 47 assists during Sunday's victory over Southern Mississippi.

The UTSA volleyball team (6-9, 4-5 Conference USA) continued their C-USA slate with a matchup against the Southern Mississippi Golden Eagles. The Roadrunners claimed the first match of the series in three sets, only dropping one set.

The Roadrunners began the first match with high momentum, claiming the first set 25-14. Starting with an early lead over the Golden Eagles, five kills from the UTSA front row and three service aces gave the ‘Runners a 10-3 lead. Southern Miss was unable to recover from UTSA’s strong offensive start, staying out of scoring range to take the set. A kill from junior outside Hannah Lopez propelled the ‘Runners to a 10-point lead, 20-10. Junior middle blocker Alison Jennings sealed the match point for UTSA with a kill assisted by sophomore setter Courtney Walters.

UTSA took an early 5-1 lead in the second set, continuing their momentum. Four serving runs kept the Golden Eagles from gaining the advantage throughout the set. Walters fueled the offensive front with 47 assists, 12 digs, three blocks, two kills and two aces. Back-to-back kills from freshman middle blocker Amanda Ifeanyi pushed the ‘Runners to the final point of the set, 25-16.

Turning the tide for the third set, Southern Miss took an early 10-7 lead, benefitting from UTSA hitting errors and a strong front row attacking presence. The Roadrunners were unable to regain their footing, staying behind for the entirety of the set. An eight-point run brought UTSA within a two-point deficit, but a block from the Golden Eagles’ side of the net closed the set, 21-25.

Concluding the match with a fourth-set win, the ‘Runners remained in the lead. Junior outside Hannah Lopez led the front row attack with 18 kills, seven digs and three aces. Junior outside Kirby Smith finished with a double-double of 11 kills and 12 digs, followed by sophomore middle Jessica Langridge with 10 kills. A kill from Smith closed the match 25-22.

The ‘Runners were unable to secure the win for the second match of the series, losing 2-3 in a five-set match. Trading points back and forth to start the first set, UTSA took the lead, 12-11, off a kill from Langridge to gain the advantage. Lopez recorded a career-high 26 kills and 16 digs to lead the offense.

Taking the lead early in the second set, the UTSA offense kept the Golden Eagles at bay until a service run and multiple kills from the Southern Miss side of the court evened the score at 18-18. Turning the tide for the set, the ‘Runners were unable to regain the upper hand. A hitting error from Smith closed the set 22-25.

Continuing the effort, the Golden Eagles maintained the lead in the third set. Smith chipped in 20 kills and 17 digs for a second double-double of the series. Fighting back from a point deficit, UTSA tied the set at 24-24, forcing Southern Miss to score the additional point to close the set 24-26.

Starting behind in the fourth set, the ‘Runners regained their flow, coming back from a five-point deficit and tied the set 10-10. A kill from Lopez tipped the scales in UTSA’s favor, providing the first lead of the set for the ‘Runners. The Golden Eagles returned to the lead with a service run, but two service streaks from libero Mia Ybarra and defensive specialist Alexis Pratt gave the ‘Runners the push to claim the set 25-20, pushing to a tiebreaker.

The fifth and final set brought eight tie scores and four lead changes, and the ‘Runners fought for dominance of the court. Tied at 15-15, the Golden Eagles forced a hitting error and claimed a kill to win the set, 17-15, and the match 3-2.

The ‘Runners will be back in action in Birmingham, Al., Mar. 21-22, as they face the UAB Blazers. Both games will be available on C-USA TV.