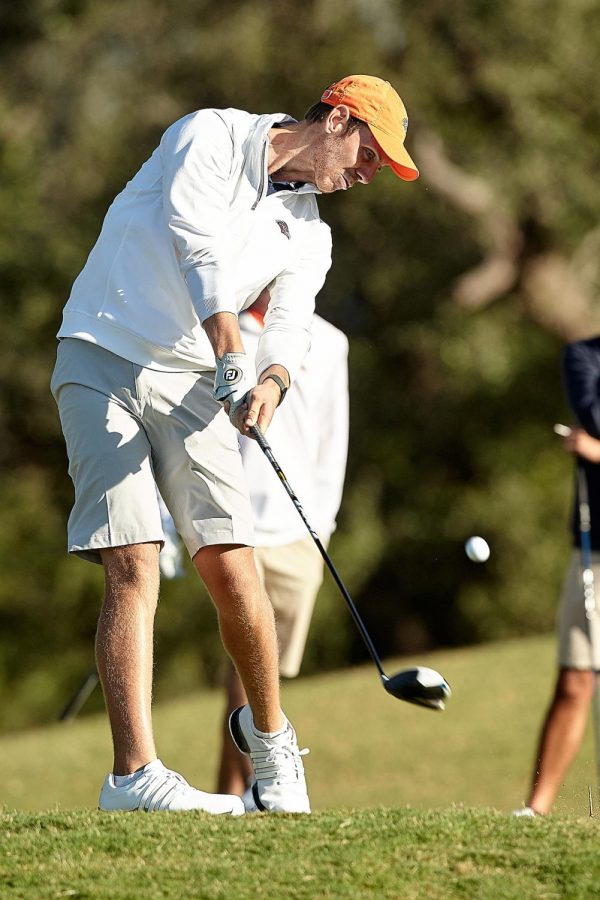 Collin Clark hits a drive during a tournament earlier this season. Clark's third round 69 moved him into a tie for 17th in the tournament and helped secure a second place finish for UTSA.

Chad Sewell fueled the men’s team with a seventh-place finish at Trinity Forest Golf Club, recording his top finish of the year. Sewell shot a 214 for the three-round tournament, chalking in 11 birdies. Collin Clark followed 10 places behind Sewell for a 17th spot finish, finishing with a third-round best of 69. Christian Fanfelle rounded out the top 20 finishers with a tie for 20th.

Hunter Bott turned in his scorecard tied for 26th, making a comeback from a five over par round with an even round of 71 to finish the trifecta. Closing ranks for the Roadrunners was Michael Rome. Placing 54th, Rome secured back-to-back two over par performances before shooting an 81 in the final round.

The ‘Runners were seven strokes behind first-place champions and tournament hosts, SMU. Continuing the season, the men’s team will be traveling to compete in Rice University’s Bayou City Collegiate Classic, April 15-16.

Hosting a tournament on their home course, the women’s team also clinched a second-place finish at the Maryb S. Kauth Invitational. The ‘Runners’ success was driven by three top ten finishes. Camryn Carreon claimed the fifth-place finish, recording a tournament third-best 27 pars, scoring a 147 for the three rounds. Ana Gonzalez followed closely behind with a tie for sixth place. Gonzalez registered a par score of 72 in the first round, fueling her 224 finish overall. Rounding out the top ten finishers for UTSA was Hannah Holzmann. She recorded six birdies for the invitational, securing her eighth-place finish with a score of 225.

Nicole Polivchak tied for 17th, shooting a 228, recording two three over par rounds followed by a 78-stroke final round. Katia Mexsen finished tied for 46th place, finishing with a 244 after all three rounds. Live Hope participated in the tournament as an individual, placing 35th with two 80 point round scores to conclude with 238 overall strokes.

The women’s team will be traveling to Argyle to compete in North Texas’ tournament, The Bruzzy, March 28-30.