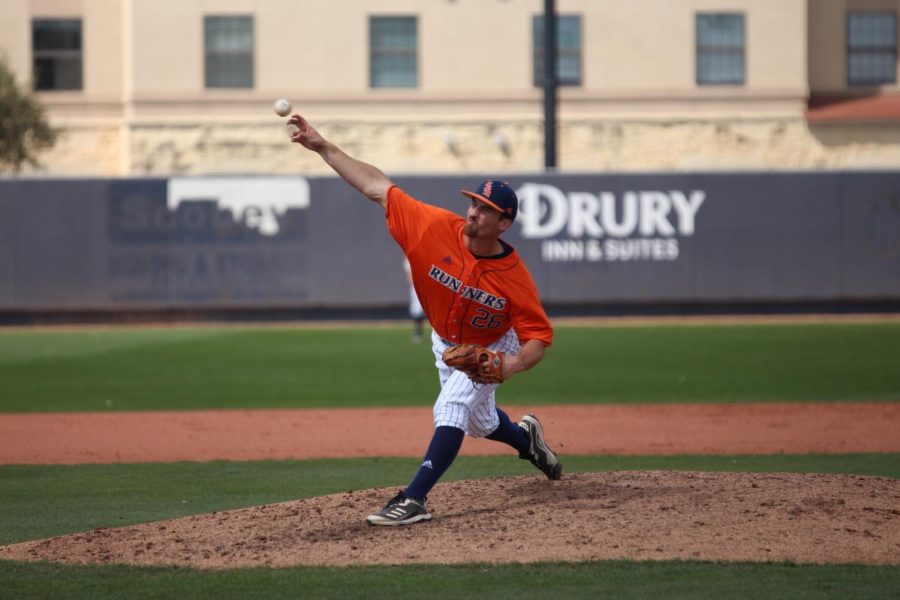 Shane Daughety delivers a pitch during a game against UT Arlington earlier this season. Daughety is off to a fast start on the mound, holding a 2-0 record in four appearances this season, all while allowing 6.75 hits and striking out 9.4 batters per nine innings.

UTSA baseball (8-7), fresh off of a five-game losing streak to strong SEC and Big 12 programs, were in Corpus Christi from Friday, March 19, through Sunday, March 21, for a three-game series against the Texas A&M Corpus Christi Islanders (4-14). The series served as a welcome return to form for a UTSA pitching staff that had allowed 33 runs during the losing streak and featured another strong offensive performance by the Roadrunners, securing a UTSA series sweep.

The series got started on Friday night, and the UTSA offense carried the day. Led by a standout performance from catcher Nick Thornquist, who went 4-4 at the plate with five runners batted in (RBI), two runs scored, a double and a triple, UTSA jumped out to a 6-2 lead after three innings, thanks to a five-run third inning. Thornquist’s day was punctuated in the fourth inning when he smashed a triple to score Dylan Rock, and a throwing error by the Islander’s third basemen allowed Thornquist to come all the way around to score for an unofficial inside the park home run, extending the UTSA lead to 8-2. UTSA added another three runs in the top of the fifth, and the lead sat at 11-3 after five. This was more than enough of a cushion for the UTSA pitching staff. Luke Malone (1-1, 3.66 ERA) made his fourth start of the season and turned in a decent outing, going 3.1 innings while allowing six hits, three earned runs, four walks and a strikeout. However, Hunter Mason (2-2, 3.60 earned run average), who came on in relief of Malone in the fourth inning, was the true standout on the mound Friday night. Mason has struggled at times this season but was in dominant form in relief. Called on with a runner on third in the bottom of the fourth with only one out, Mason retired the first two batters he faced to get out of the jam. From there, Mason worked the next five innings to finish the night with 5.2 innings, allowing five hits, two runs with one unearned, one walk and four strikeouts. Crucially, Mason’s outing preserved the bullpen for the rest of the series. The Islanders managed to cut into the eight-run lead with two runs, but back-to-back chances in the bottom of the eighth and ninth innings with runners on second and third were shut down by Mason, who tight-roped his way out of danger to finish the game and give UTSA the opening win of the series 11-5.

In contrast to the fast offensive start for UTSA in game one, game two featured an intense pitcher’s duel. Shane Daughety (2-0, 2.25 ERA) turned in another excellent start on the mound for the Roadrunners, working six innings, allowing five hits, one earned run, one walk and striking out nine Islanders. The lone blemish on Daughety’s day was in the bottom of the fifth inning when a ground ball resulted in a double play, but an Islander runner came around to score to give them a 0-1 lead. On the other end, though, Corpus Christi’s pitching was just as dominant, with starter Hayden Thomas allowing just three hits through six innings. In the top of the seventh, however, UTSA’s offense finally got to Thomas. Jonathan Tapia led off the inning with a walk, and Joshua Lamb moved him over to third with a single into centerfield. Austin Ochoa tied the game right afterward with a single into left field that put the go-ahead run in Lamb on second. With an opportunity to take the lead, Chase Keng executed a sacrifice bunt to move Lamb and Ochoa, but the play turned into something much bigger when a throwing error by Thomas allowed both Lamb and Ochoa to score, giving UTSA a 3-1 lead. UTSA added one more run in the seventh off a Kyle Bergeron double to score Keng to take a 4-1 lead. The UTSA bullpen faltered in holding the lead, though. Daughety was relieved in the bottom of the seventh by Arturo Guajardo (0-0, 6.75 ERA), and he struggled, allowing the first two batters he faced to reach safely. A strikeout after gave hope that Guajardo was settling in, but a walk to load the bases with one out signaled the end of Guajardo’s outing, and he was relieved by Daniel Garza (1-0, 2.45 ERA). Called on to get out of the jam, Garza was unable to get out of the inning unscathed, allowing three runs to come across to score to tie the game at four. However, undeterred, UTSA came back in the top of the eight and went to work. With two runners on, Griffin Paxton delivered, lacing a double down the right field line to score Lamb and restore UTSA’s lead. Up by just one run, UTSA wanted more and Rock obliged with a double RBI single up the middle to give UTSA some insurance and take a 7-4 lead. It turned out they would not need it as Garza, now working with a clear set of bases, was dominant over his last two innings of work, striking out the next five batters he faced before inducing a ground ball to end it and give UTSA the win in game two of the series 7-4.

As tense as game two was, the finale of the series for UTSA was much more comfortable. Simon Miller, making his first career start for the ‘Runners, turned in a dominant performance on the mound, working five innings of scoreless baseball, allowing just one hit, one walk and recording one strikeout. This dominant start was more than enough for UTSA on Sunday afternoon when the offense kicked into high gear early. By the time Miller exited the game after the fifth inning, the team had handed the bullpen an 8-0 lead. Kobe Jaramillo (0-0, 5.14 ERA) and Ryan Ward (0-2, 6.75 ERA) allowed one run over the final four innings of work, and UTSA cruised to 10-1 victory and the series sweep of the Islanders. The ‘Runners’ offensive explosion was paced by Paxton, who hit from the leadoff spot and went 3-5 with three RBIs and two home runs, a solo shot to right field in the third inning and a two-run homer to the same location in the fourth.

The series sweep of Texas A&M-Corpus Christi helped move the ‘Runners back over .500 on the season. Heading into the opener of conference play next week, the identity of this team is slowly beginning to take shape. UTSA currently boasts four everyday players hitting above .300 on the season in Paxton, Thornquist, Lamb, and Tapia. Paxton, in particular, is off to a scorching start at the plate, currently hitting .383 with four home runs and 16 RBIs through 15 games. As a team, UTSA gets on base at a very high rate, ranking first in Conference USA (C-USA) in batting average, hitting .294 as a team, and on-base percentage, at .389. The number of scoring opportunities presented to the ‘Runners has helped them rank third in C-USA in both runs scored with 124 and RBIs with 109. The pitching staff’s performance for UTSA has been middle of the road so far, ranking around the middle of the pack in C-USA, although these results are possibly skewed as a result of UTSA’s games against some of the most dangerous offenses in the nation in LSU, TCU and Baylor, who all rank inside the top 15 in the nation in runs scored. Malone and Daughety have safely secured their spots at the top of the rotation heading into conference play and early indications show that the third spot in the rotation will likely be filled by the committee this season.

UTSA will begin C-USA play on Friday, March 26, at 6 p.m., with a four-game series against the Rice Owls (10-9). The games will be available to watch on CUSA.TV.