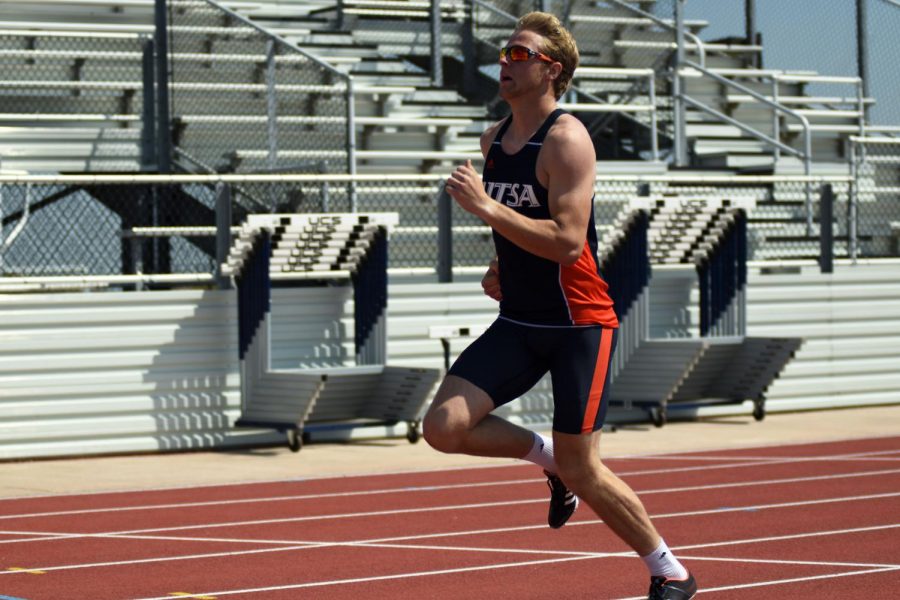 Justin Wright keeps a steady pace while competing in a meet. Wright, a multi-discipline specialist, finished third in the Heptathlon at the C-USA Indoor Track & Field Championships.

The UTSA Track and Field team’s performance at their annual home meet, the Roadrunner Invitational, was a podium-filled event. Coming off their success at the Conference USA Indoor Championships, the meet held March 18-20, saw the Roadrunners break two school records and turn in an overall performance dominated by field event success.

Sigrid Kleive placed second in the javelin, setting the school record with a throw of 45.51m. Kleive claimed the silver in the high jump with a 1.76m, 5-09.25, leap. Alanah Yukich stepped up in first place on the podium for the 400m hurdles with a finish of under a minute, 58.70, three seconds ahead of Houston’s Erin Derrow’s silver finish. Her finish set the school record in the hurdles, claiming a nearly three-decades-long title. Faith Roberson finished three spots behind Yukich in fourth place with a final time of 1:02.60.

Maren Wilms kickstarted the success for the ‘Runners, finishing fourth in heptathlon with 4701 points. Maia Campbell finished third in shot put with a throw of 14.93m, the first field event competitor to place in the top-three for UTSA. Lacee Barnes followed closely behind with a throw of 13.91m, finishing her throws in sixth place. Barnes secured the bronze medal for the discus, throwing 53.57m. Ingeborg Gruenwald stepped on the top of the podium in long jump with a jump of 6.27m, 20-07. Danielle Spence and Johanna Soover were second and third on the podium for the triple jump, finishing with jumps of 12.54m and 12.02m, respectively.

Brooke Lomax set the pace for the 800m, crossing the line second behind Texas’ Alyssa Duhart, stopping the clock at 2:17.39. Taylor Armstrong crossed the line fourth in the finals of the 200m race with a time of 24.40.

The men’s team saw similar field success. Angel Robles claimed the seventh-place spot in the hammer throw with a 15.34m. Jorge Ayala followed directly behind him in eighth with a 15.34m throw. Justin Wright closed the javelin with a 44.93m throw, slotting him into fifth place. Grant Szalek placed second in the high jump with a 2.06m leap, only 2 inches behind Kansas State’s Kyle Alcine for the gold. Christie Le Roux claimed silver in the long jump with a 7.23m leap, two inches behind UIW’s Rodney Littlejohn.

Andrew Pirog led the 400m hurdles, securing the gold medal with a 51.84 finish. Zack Kovar led the ‘Runners in the 800m with a 1:54.19 finish, landing him in fourth place overall. Jake Smith led the UTSA distance runners in the 5000m race, finishing fourth behind a triple podium finish of UTEP runners, with a time of 15:01.91, only .66 seconds behind third place.

The ‘Runners will be back in action at the Clyde Littlefield Texas Relays in Austin, March 25-27.