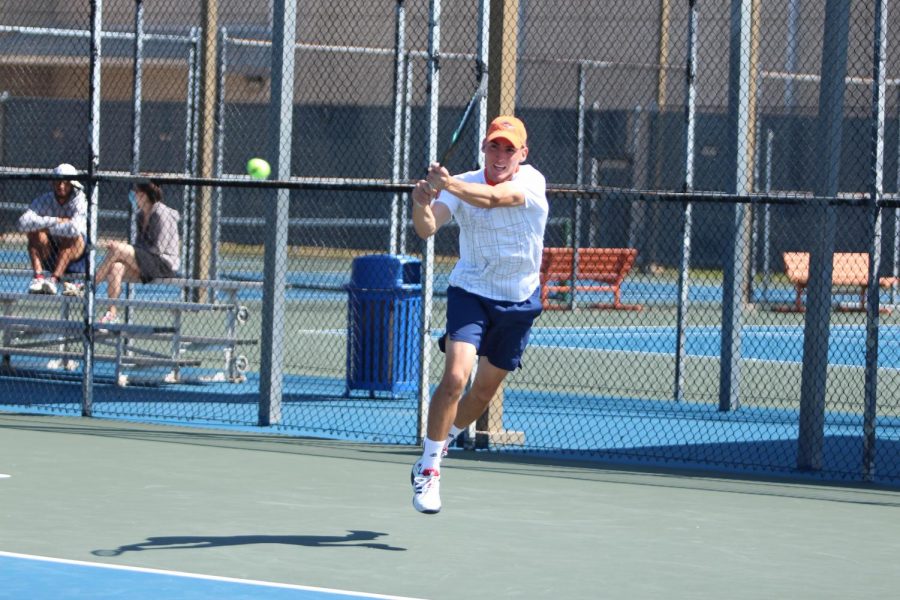 Joao Ceolin returns a ball during a match earlier this season. Ceolin has compiled a 10-3 overall record in singles play and an overall mark of 9-4 in doubles.

This past weekend UTSA players in the men’s and women’s tennis teams faced rivals from Lamar, North Texas and South Florida.

The men’s tennis team, ranked No. 54 in the nation by the Intercollegiate Tennis Association (ITA), fell to #29 South Florida 5-2 on Friday afternoon at the UTSA Tennis Center. The Roadrunners got off to a tough start, losing two doubles matches. In singles competition, UTSA had a few really solid matches. Freshman Garrett Skelly won his match in two sets, sweeping his opponent Antonio Muniz (USF) 6-1 7-6. On court two, senior Joao Ceolin bested #69 Jakub Wijcik 6-4 in the first set. After losing the second set 4-6, Ceolin fought back to win, finishing the third set 6-4. The remaining singles matches were losses for the ‘Runners. The final doubles match was unfinished.

“We had a very fun college match today,” UTSA head coach Sergey Avdeyev said. “It was very close, but we couldn’t get the double point. We started well in singles and had our chances on certain courts but ended up coming up a bit short. Proud of those who were able to win. We will bounce back on Sunday.”

March 28 proved to be much more fortunate for the ‘Runners. The men’s team defeated Lamar 4-0. With the victory, the men’s team stands at 11-6. In doubles play, senior duo Kai Breitbach and Ceolin topped LU’s Joshua Sundaram and Carlos Paton Canal 6-4. On court two, doubles pair Juri Reckow and Slava Gulin fell 6-3 to Filippo Salsini and Joshua Taylor. Following the win on Court 1, Javier Gonzalez and Skelly secured a 6-1 victory. Shifting into singles play, the ‘Runners won critical matches on courts two, three and four that contributed to the win. Initiating the momentum that would lead to UTSA’s victory, Ceolin captured a 6-2 6-3 win against opponent Filippo Salsini. After that, Breitbach won 6-4 6-2. Concluding the contest, Gulin initially dropped the first set of his match 3-6; however, he swept Paton Canal in the second set, 6-2. In the final set, he came out 6-1 in a match-winning victory.

Meanwhile, the women’s tennis team battled it out against North Texas in a home match. The ‘Runners won two of the three doubles matches, and two of the six singles matches. Freshman Alexandra Weir and junior Catalina Cabrique posted a 6-0 win on court two. Sophomore Keegan McCain and junior Jasmin Starr also obtained a straight-set victory of 6-1. Weir dominated on court two in singles, claiming a hard-fought and close win of 7-6 7-6. On court four, McCain came out on top, finishing 6-2 6-2. Overall, UTSA finished just short of the win 4-3.

The men’s team will return to action in Houston on Saturday to compete against Rice. The women’s team will face off against Texas State at the UTSA Tennis Center on April 9.