Softball takes one of four from Louisiana Tech in conference opener 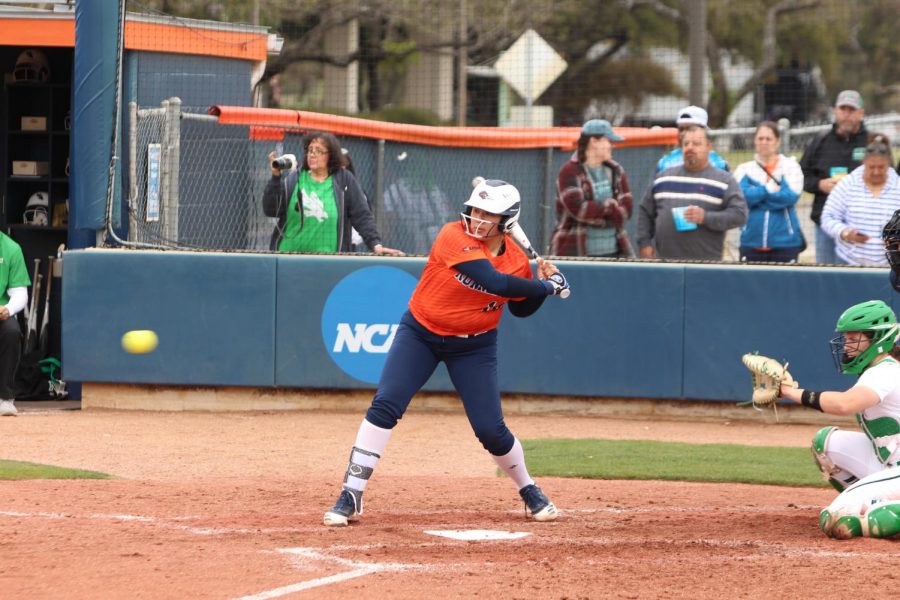 Victoria Villarreal takes a cut at a pitch during a game last season. Villarreal has appeared in 12 games this season and owns a 0.983 fielding percentage.

UTSA softball (7-19, 1-3 C-USA) finished their first week of conference play in a less than ideal way. UTSA faced off against Louisiana Tech (13-16, 3-1 C-USA) in a four game series that went the way of LA Tech 3-1. While UTSA lost the series, the way they lost does show promise for the rest of their season.

The first game was very slow until the fourth inning when LA Tech scored three runs in a row. LA Tech loaded the bases, then layered on runs with singles out to left field and even managed to steal home for a run. LA Tech added one more in the fifth, with the score 4-0 in the sixth inning. UTSA was finally able to get some runs on the board. A grounder from Lourdes Bacon allowed Marena Estell to score, Kat Ibarra hit to left center, which let Taylor Medina score and to close the inning Celeste Loughman hit a two-run home run, tying the game 4-4. UTSA had their backs against the wall after LA Tech scored four additional runs in the final inning. Unfortunately, UTSA was unable to make up the points in the seventh inning, ending the game 8-4.

After suffering a hard-fought loss earlier in the day, UTSA came back with a vengeance closing the second game out in five innings. UTSA opened up with a bang when Loughman hit a home run to start the game off. Medina then hit a single straight back up the middle past second base, which allowed Estell and Kindell Brooks to score. The first inning ended 3-0, but the ‘Runners did not stop there. In the second inning Brittany Coe hit a grounder letting Bacon score. Estell walked, advancing everyone and allowing Ibarra to score. Madison Washington, with a single to third, scored Loughman, and finally Medina with a hit to left center scoring both Estell and Brooks. The score now 8-0 heading into the third; LA Tech did score a run, but that run would not make a difference after UTSA’s third inning. Notably in the third, Loughman broke the UTSA school record for steals after swiping second base. UTSA scored nine runs in the third inning, which all but ended the game. To start the scoring run off, Loughman homered, scoring Ibarra. Washington then reached on a fielder’s choice to score Coe, followed by Medina reaching on a fielding error, allowing Brooks to score. Bacon then came up with a single up the middle to drive in Estell. To put the nail in the coffin, Ibarra hit a grand slam scoring Bacon, Medina and Washington. With the score 17-1, all that was left to do was wait until the mercy rule kicked in, ending the game in the fifth 17-2.

After such a dominant performance in their second game the day prior, UTSA fell victim to two come from behind wins for LA Tech on Saturday. The first game of day two, UTSA only scored through home runs, two from Washington, one from Ibarra and one from Estell. While this did get them an early lead, playing for only home runs is a bad idea because when a team cannot get a perfect hit, they cannot score, and this game served as an example of that. UTSA was up 4-6 heading into the final inning when LA Tech scored four runs. UTSA had the chance to win or tie, but with two strikeouts in the final frame, the game ended with a comeback win for LA Tech 8-6. The final game of the week for UTSA ended exactly how the previous game did. UTSA led 2-1 heading into the final inning, when LA Tech scored three times, ending the game with a comeback win 4-2.