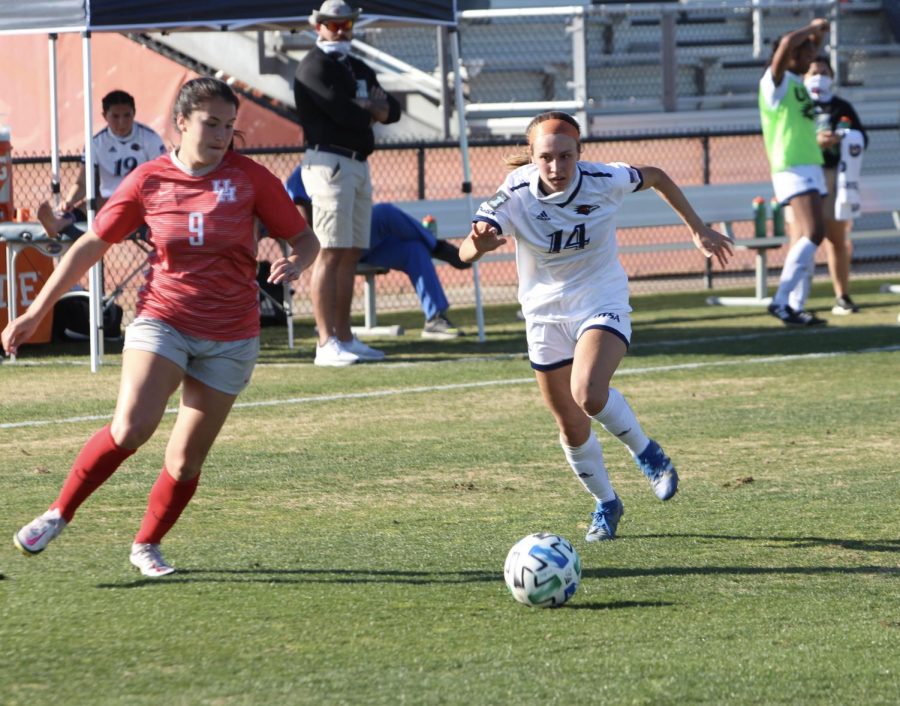 Ellis Patterson races a defender for a ball earlier this season. Patterson picked up her second assist of the season on Monday against UTEP.

The UTSA soccer team (3-6-1, CUSA 1-4-0) opened the record books to ink a 2-1 win over the University of Texas at El Paso (UTEP) as the first win against the Miners in program history.

The Roadrunners started the game with a strong defensive appearance, deflecting two Miners’ shots within the first five minutes. Claiming the first points on the board, the ‘Runners scored an early goal in the 11th minute of the first half. An assist from Ellis Patterson found the foot of Abby Kassal inside the box. The right-footed kick sent the ball past the keeper for a UTSA lead. Keeper Jil Schneider kept UTEP from scoring in the first half, recording two back-to-back saves.

Fresh off the halftime break, Kassal increased the ‘Runners’ lead in the 47th minute. Scoring off a corner kick, UTSA led the Miners by two goals. In the 73rd minute of the second half, the Miners got on the board as a shot got past Schneider. Patterson led the team in shots, taking five of the 11 attempts.

The ‘Runners will be on the road to Denton to face North Texas in the last game of the 2021 regular season on April 9. Kickoff will be at 7 p.m., and the game will be aired on CUSA.tv.