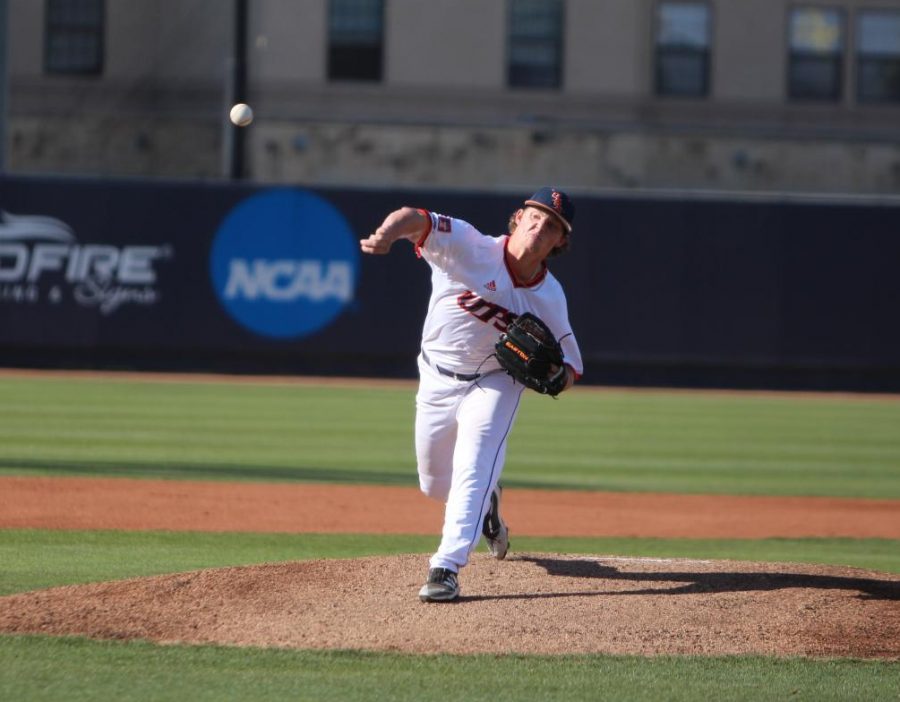 Reece Easterling throws a pitch during the second game of the double header on Saturday afternoon. Easterling was superb on the mound, working 5.1 innings while allowing only two runs, one earned and striking out five.

Coming off of a series sweep at the hands of Southern Mississippi (21-9, 8-3 C-USA), UTSA baseball (14-12, 6-5 C-USA) was back in action for a four-game series against the Middle Tennessee Blue Raiders (16-14-1, 5-6-1 C-USA). A back-and-forth, hard-fought series saw both teams flash superb pitching and clutch offensive hitting, but in the end, the ‘Runners picked up the series victory. The series win represented a fine rebound in form for UTSA’s starting rotation coming after a prior series sweep by Southern Mississippi that saw them surrender 16 runs.

The series began on Friday, April 9, and it was the sophomore John Chomko (0-1, 2.76 ERA) who received the start on the mound for UTSA. Chomko turned in a fantastic effort on the mound, allowing only one hit through the first four innings. In the fifth, though, Chomko suffered his only real blemish on the day, allowing a one-out single before Middle Tennessee’s Brian Dillingham connected on a breaking ball for a two-run home run to left, giving the Blue Raiders their first lead of the ballgame 0-2. The UTSA offense, which had been held in check by Middle Tennessee starter Aaron Brown through the first five innings, got things going in the bottom of the sixth. With runners on second and third with two out in the inning and facing a full count, Dylan Rock came through, stroking a two RBI single to right to tie the game 2-2. After holding the Blue Raiders in the top of the seventh, the Roadrunners picked up right where they left off as Nick Thornquist and Chase Keng hit back-to-back home runs, and Ian Bailey hit a sacrifice fly to score Joshua Lamb to give UTSA a 5-2 lead. The UTSA defense suffered a collapse in the top of the eighth, though, giving the lead away as three errors in the inning alongside two hits saw four runs cross the plate for Middle Tennessee as they regained the lead 5-6. UTSA, however, was not interested in letting this game get away from them. Rock led off the inning with a single to center and came around to score on a Thornquist single to tie the game at six. UTSA regained control of the lead just two batters later as a single from Lamb found its way through the left side of the infield for an RBI, and UTSA went back ahead 7-6. Clinging to a one-run lead in the top of the ninth, UTSA reliever Arturo Guajardo (1-0, 6.48 ERA) allowed a leadoff walk to put the tying run on first. Middle Tennessee subbed in a pinch runner to attempt to move into scoring position, but Thornquist proceeded to make the defensive play of the game, gunning down the runner as he attempted to steal second. Guajardo struck out the next two batters he faced to pick up his first win of the season, and UTSA took game one by a final score of 7-6.

Game two took place the following afternoon as the first half of a double header and once again, it was a tight contest. Kobe Jaramillo was given the start for the ‘Runners, and he supplied a solid effort, going five innings, allowing two hits, three runs one earned, three walks and striking out three. Jaramillo benefitted from an early lead thanks to a two-run second inning courtesy of a Lamb sacrifice fly and an Ian Bailey double that just managed to stay fair down the left field line. The Blue Raiders tied the game up in the top of the third, despite not recording a hit in the inning, off of a pair of sacrifice flies and some wild pitches and passed balls. It would be another wild pitch that handed Middle Tennessee the lead in the top of sixth as the ‘Runners fell behind 2-3 after six, having only recorded one hit since the second inning. In the dying breaths of the seventh, UTSA’s offense found its way home. Lamb doubled down the right field line with one out, and an Ian Bailey single put the winning run on first. Kyle Bergeron entered the game as a pinch hitter and got the job done for his teammates, singling to left field to score Lamb and tie the game at three. Ryan Hunt was then hit by a pitch to load the bases with one only out in the inning. Faced with a chance to win, UTSA could not come through with Shea Gutierrez going down on strikes and Rock flying out to right, sending the game to extra innings. Extra innings had proven to be troublesome for the ‘Runners this season, and that trend held true, as the Blue Raiders put up two runs in the eight and UTSA was held scoreless, dropping game two by a final score of 5-3.

Not content to play one extra inning game during the double header, the two teams decided to repeat the feat in the second half of it. Reece Easterling (1-0, 3.92 ERA) turned in the third straight strong outing for a UTSA starter, pitching 5.1 innings, allowing five hits, two runs one earned and striking out five. Middle Tennessee jumped out to an early lead in the third with an RBI single from Fausto Lopez and then added onto it in the fifth with a run coming off of a throwing error by Thornquist. Meanwhile, the UTSA offense saw multiple opportunities pass them by as they left four runners in scoring position, most egregiously in the bottom of the fifth when they had the bases loaded with one out, but Keng and Thornquist both struck out. At the very last moment, the offense woke up. Hunt led off the seventh with a single and advanced to third after Griffin Paxton laced a single into center. Rock proceeded to score Hunt and advance Paxton to second on a groundout to third. Keng moved over Paxton to third with a groundout to short and that brought Thornquist to the plate with a chance to tie the game. Following a fierce battle at the plate and down to their last strike, UTSA received a gift after the Middle Tennessee pitcher bounced a ball in that got away from the catcher and Paxton came in to score to tie the game at 2-2. Thornquist proceeded to ground out to send the game to extras. In extras, Hunter Mason (4-4, 4.56 ERA), who had entered the game in relief of Easterling in the sixth and has endured an up and down season thus far, was excellent working through the extra frame without ever getting into any serious trouble. In the bottom of the eighth, a leadoff single by Lamb followed by a single to right by Bergeron to advance him to third gave UTSA a chance to win it with a runner on third and only one out after Bergeron was thrown out attempting to stretch his single into a double. Leyton Barry stepped into the batter’s box, and following the team’s previous struggles the night before with a chance to put the game away with a runner on third, head coach Pat Hallmark made the bold move of calling for a suicide squeeze. The play was executed to perfection, with Barry laying down a perfect bunt as Lamb broke for home, beating the Blue Raiders’ desperate attempt to put the tag on him for the walk off 3-2 victory in extra innings.

After three nail biters in a row, the series finale on Sunday afternoon was rarely in doubt. UTSA starter Pepper Jones worked 3.1 innings allowing only three hits, one run, two walks and striking out three, and that was all UTSA needed that day. Bailey gave the ‘Runners the early advantage by crushing a two-run homer to left center field off the light pole. The Blue Raiders clawed a run back in the top of the fourth, but from that point, it was all UTSA. In the bottom of the fourth, the ‘Runners’ first two batters of the inning were retired, but they unleashed a furious two-out rally and put up four in the inning. They would then come right back in the bottom of the fifth and pull off the exact same feat, putting up eight runs in the inning with two outs. Notably, Hunt accomplished the rare feat of being hit by pitches in two separate at bats in the same inning. These two big innings grew UTSA’s lead to 14-1, and the ‘Runners were in cruise control from there. Thornquist capped off the big day for the UTSA offense with his sixth home run of the season to bring the score to its final tally of 15-1 as the game was called after seven innings on account of the mercy rule.

The series win moves UTSA back above .500 in both overall and conference record. The team boasts the 14th best offense in the country, currently averaging 7.9 runs per game. UTSA will continue their conference slate on the road next week from Friday, April 16, through Sunday, April 18, when they take on the University of Charlotte 49ers (22-9, 11-1 C-USA). The first pitch of game one is set for 5 p.m., and every game of the series will be available to watch on CUSA.tv.