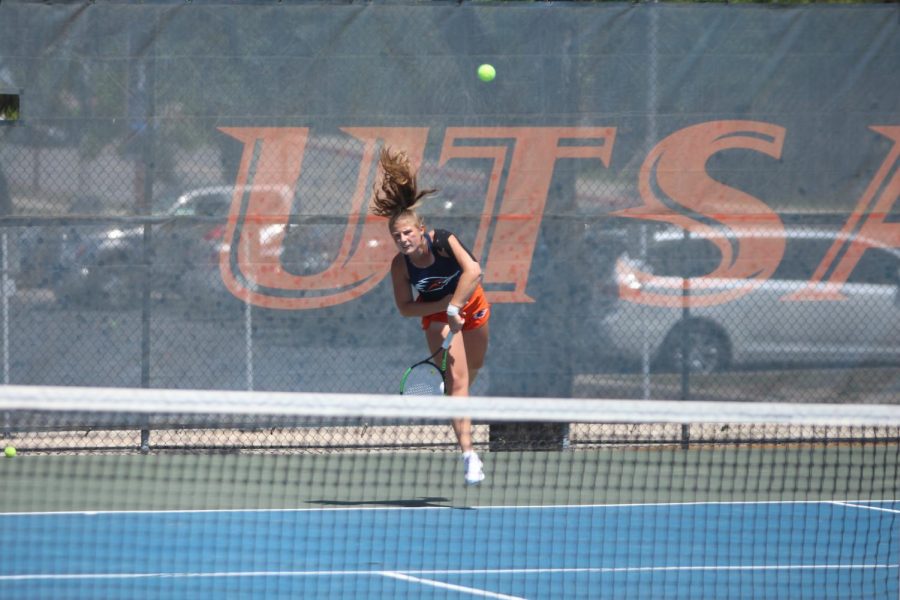 Alexsandra Zlatarova fires a serve over the net during her singles match against Texas-Arlington. Zlatarova has compiled an 11-5 record in singles play and a combined record of 10-5 in doubles.

UTSA tennis finished their second to last game before the playoffs. Both men’s and women’s games were back and forth but ended differently. In this week’s matches, UTSA took on UT Arlington, who is 6-10 for men’s and 17-3 for women’s, which is somewhat the opposite to UTSA, and it showed.

On April 10, the men’s team (13-6) took to the court in a series that ended 4-3 in favor of UTSA. In this match, Joao Ceolin secured his ninth straight match win, which helped to push UTSA over UT Arlington. This match was also the seventh home win for UTSA out of eight, showing how dominant they are with home-court advantage. For singles this week, the team went 3-3; Ceolin won on court two, going 6-2 6-4. Javier Rodriguez won on court five in a close bout 6-3 2-6 6-2 and Garrett Skelly won on court six in a strong showing 6-2 6-2. In doubles, UTSA went 2-1, with Ceolin and Slava Gulin winning 6-3. Javier Gonzalez and Skelly won their matchup 7-5, and Juri Reckow and Kai Breitbach lost 6-4. Though less than dominant, the men still played well and got the win in the end.

On the women’s side of things (8-10), things were going great until the last few games cost them the series. To start things off, in doubles, Aleksandra Zlatarova and Sophie Omoworare won their match 7-5, and Jasmin Starr and Keegan McCain won 6-3. Unfortunately, Alexandra Weir and Catalina Cabrique lost 6-2 in their match, leaving UTSA 2-1 in doubles. In singles, things were looking good early. Starr won 6-2 5-7 10-5, and Zlatarova won 6-2 6-1. With a 2-0 lead over UT Arlington, UTSA then lost four games in a row. After the losses, UTSA finished just short, 3-4 versus UT Arlington.

The men’s team will play their last game before playoffs against nationally-ranked Oregon #47 on April 13. On the flip side, UTSA women’s team will be playing against Texas A&M-Corpus Christi (19-3) on April 16. These are tough opponents for UTSA, but if they can win this series then playoffs could last longer than expected.