Soccer closes out season with convincing loss to North Texas 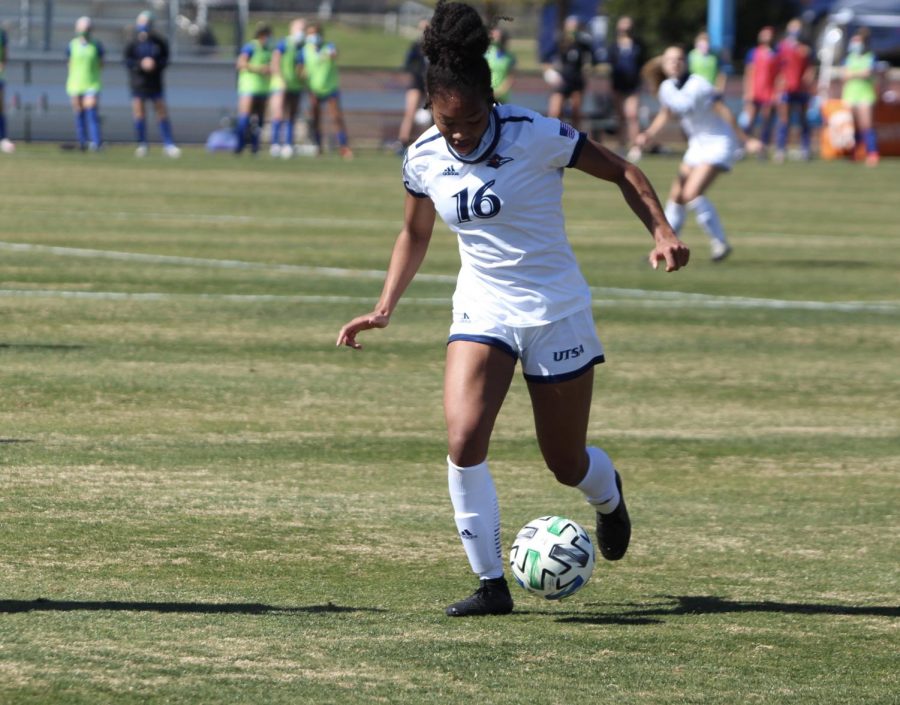 Sasjah Dade plays a ball during a game earlier this season. Dade established herself as a stalwart on the defense for UTSA starting all 11 games for the 'Runners during her freshman season.

Heading into the final game of the season, UTSA soccer (3-7-1, 1-5-0 C-USA) was already assured of missing the Conference USA tournament. Despite this, however, they had the chance to accomplish something they had not been able to all year, win two games in a row. Standing in the way of this was the University of North Texas Mean Green (7-3-1, 4-1-1 C-USA). Unfortunately for the Roadrunners, North Texas dominated play throughout and cruised to a 0-3 victory in the regular season finale.

The game started off quickly with both teams pushing the pace and running up and down the field, neither team content with sitting in their half of the field and controlling possession. Jil Schneider was called on almost immediately by the ‘Runners to make a fantastic save, getting a hand on a laser of a shot from outside the 18-yard box to keep the game level. Schneider being forced into making good saves became the theme of the first half as UTSA got nothing going on offense, registering no shots in the first half. Conversely, North Texas exerted massive amounts of pressure on Schneider and the UTSA defense, pumping in nine shots during the first half. Schneider did what she could by making five saves in the first half, but number six proved to be too much for her as North Texas’ Taylor Tufts capitalized on a rebound following Schneider’s fifth save to push it past her and give North Texas the 0-1 lead in the 45th minute.

UTSA’s offense picked up steam early in the second half with Abby Kassal and Alyssa Blankenship taking shots within the first ten minutes, but both efforts were handled deftly by North Texas keeper Kelsey Brann. In the59th minute, North Texas turned up the heat and were rewarded for their pressure in the 60th minute, after Desiree Ramirez’s long-distance snipe from outside the box found the top right corner of the net to double their advantage to 0-2. This marked the end of the day for Schneider as Taylor Rath came on as the substitute keeper. Despite changing keepers, little else changed as North Texas continued to pepper the net with shots. Rath came up with saves in the 62nd and 72nd minutes, but an absolute defensive misplay on a miscommunication between her and defender Kendall Kloza allowed Connor Barker one of the easier goals of her life with an easy tap in to extend the lead to 0-3. This result held up until the end, and North Texas got the victory at home.

Overall for UTSA, the season was marred by postponements and cancellations, leading to playing only 11 of the originally scheduled 19 games during the season. The team’s offense struggled and, despite outshooting opponents by a 130-98 margin, were outscored 9-15 during the season. While the season may have been rough in a collective sense, individually, the ‘Runners enjoyed some accolades. Ellis Patterson, who was named to the C-USA Preseason All-Conference Team at the start of the season, finished it out by being named to Third-Team All-Conference. Kassal, the team’s leading goal scorer, also received conference accolades after she was named to the C-USA All-Academic First Team. The last game of the regular season also marked the final games for defender Bella Keane and forward/midfielder Tara Giesen in their UTSA careers.