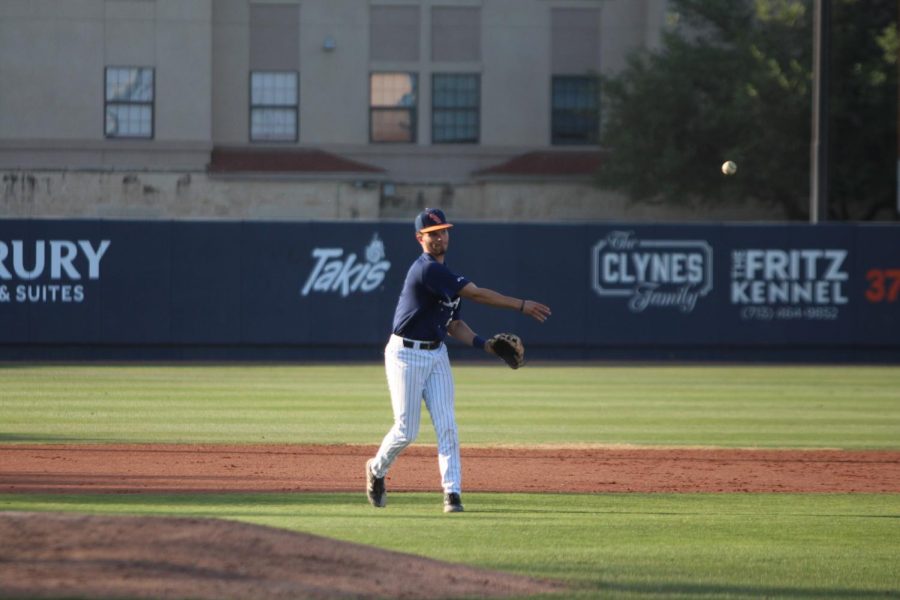 Joshua Lamb makes a play at shortstop and throws to first to retire the runner. Lamb has enjoyed an excellent season for the 'Runners ranking third on the team in batting average at .333.

UTSA Men’s baseball (15-15, C-USA 7-8) played their fifth conference opponent in the Charlotte 49ers (25-10, C-USA 14-2) this past weekend at Charlotte. Each match was extremely close, with both teams winning the game in just one inning.

The weekend started Friday at Hayes Stadium around 6:00 p.m. and was shaping up to be a good game. Both teams went scoreless in the first couple innings, with strikeouts coming from both pitching staffs. UTSA scored the first run of the game in the third after Nick Thornquist doubled with a hit to left center and was brought home by Chase Keng right after with a hit down the middle. Just as things started to look like a slow game, Charlotte came out and scored five runs in the bottom of the third. The game was all but sealed away at this point. UTSA did pick up another run off the back of Griffin Paxton, but was immediately answered by Charlotte with a run of their own. The first game ended 2-6 Charlotte.

Saturday saw a double header between the two teams. Coincidentally, these games were also the closest of the series. The first game of the day opened with UTSA getting an early lead. To start the top of the first off, Dylan Rock walked then was brought home by Thronquist and Keng, both with singles. Thornquist was next to score, thanks to a nice hit to left field from Joshua Lamb. With UTSA up 2-0, the game stalled out for a couple of innings. UTSA extended their lead in the top of the fourth with a score from Jonathan Tapia, but this time they were answered with two runs from Charlotte. In the fifth, both teams scored; Thornquist hit a homerun and Charlotte got a run off of a hit to left field, bringing one of their runners in. In the top of the sixth, Tapia once again scored thanks to a single from Josh Killeen and a hit from Paxton over center field. UTSA in the sixth changed pitchers to Arturo Guajardo, stepping in for Hunter Mason who had a runner on third. After this switch, UTSA allowed seven runs which was the killing blow in this game. UTSA did manage to get one more in the seventh thanks to a Lamb homer, but it wasn’t enough to close the lead, ending the game 6-10 Charlotte.

The second game of the double header was high scoring from both sides and came down to the wire. UTSA started the scoring in the second inning with a homer from Leyton Barry that also scored Lamb. These were answered by Charlotte with three runs of their own. Charlotte in the third added two more runs, making the score 2-5. Heading into the fourth inning down three runs, UTSA scored five runs thanks to some solid hits and home runs from Paxton and Chris Shull. Charlotte did manage to get a run back in the fourth, meaning UTSA was only up one run, 7-6. Heading into the fifth, UTSA was looking to take advantage of the weak pitching that was seen in the fourth. Charlotte took note of this and changed their pitcher, but the change didn’t seem to matter, given that there were still multiple pitching errors on the side of Charlotte which resulted in three runs for UTSA. With UTSA now up 10-6, the game would become tied once more after Charlotte scored four runs in the fifth inning. With the score set 10-10 going into the last couple of innings, the game started to slow down. UTSA was unable to score in the sixth, unfortunately. Charlotte did with a home run. With UTSA down one score in the seventh inning, they were unable to close the lead, losing a close game 10-11 Charlotte.

The final game of the series was nearly as close as the last few, but this time the ‘Runners would come out on the top. UTSA opened up strong with a score from Paxton and a home run from Lamb, which allowed two others to score. Charlotte managed two runs in return, making the score 4-2 UTSA. UTSA was unable to score in the rest of regulation; however, this was not the case for Charlotte. The 49ers were able to tie up the score at 4-4 in the bottom of the third. Now tied at 4-4, the next time either team would score would be in the 10th inning when UTSA took advantage of the pitching changes and put up seven runs. Even though Charlotte managed to get a run of their own, they were unable to match the ‘Runners final score of 11-5 UTSA.