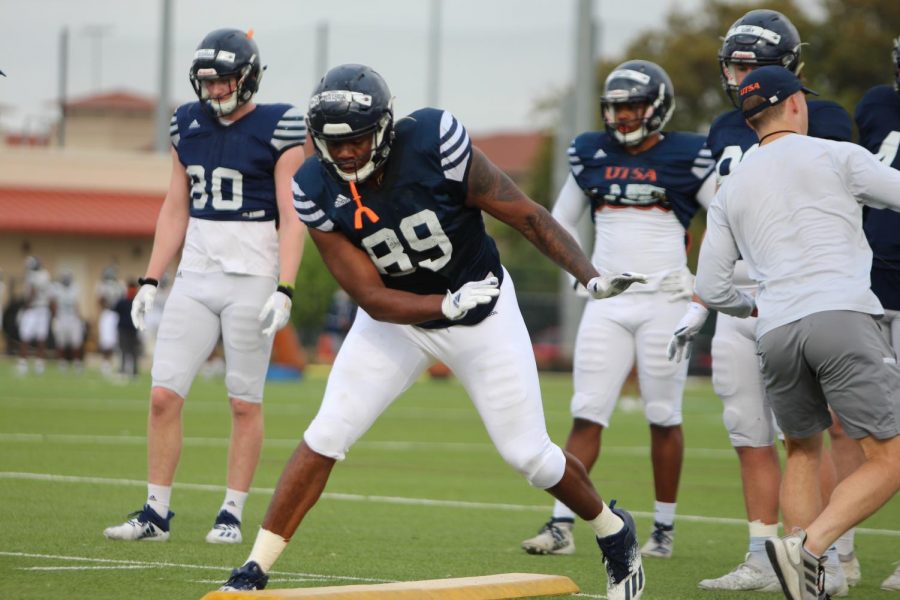 Leroy Watson takes part in a receiving drill during spring practice. Watson is one of 12 returning "super" seniors for UTSA and is coming off a season where he caught 14 passes for 176 yards.

On March 29, UTSA football hit the practice fields once again for early preparation for the upcoming season. Every member was excited and anxious for a fresh start. With returning “super” seniors, another year under head coach Jeff Traylor and his coaching staff, followed by a great supporting cast of players, the anticipation should come as no surprise.

With a couple of weeks under the team’s belt, there has been much done in a small amount of time. Relationships have been created, which is extremely important this time of year in order to boost team morale. The reunification of bonds will be necessary for replicating the successful season they had last year. In multiple interviews with coach Traylor and some players speaking on spring practice, what it means for them and how it will impact the 2021 season, there was nothing but positive praise from everyone. No one had more to say than the very enthusiastic coach Traylor. On the very first day of spring practice, the coach was in high spirits after a solid day and the exciting potential on display.

After one week, the coach noted, “They are even more bought in than they were last year, which is amazing. We really have taken that next step, I don’t know what that’s going to mean as far as wins and losses, but I do know we are a much better football team.” Traylor added, “I’m a better head coach, my coordinators are better, my players are better because we have all been together a year and with familiarity and repetition, were just better.”

Starting quarterback Frank Harris had some humble words as he mentioned this time of the offseason was very different last year. He expressed gratitude and happiness to see a spring practice on full go.

“It was just a great feeling going out there doing what we love, and you just can’t take it for granted,” Harris said. “This time last year, we weren’t able to have spring ball so just going out there, you gotta cherish the moment, it was just great to be out there with the guys, we had a fun time.”

The All-American running back Sincere McCormick pointed out that the extra year together will only strengthen the team and build relationships.

“Having the spring going into the summer into the fall is going to be a big push leading into the season, the standard is higher, and the expectation is higher, the culture has to get with the standard,” McCormick stated.  He credits spring practice for “building a closer relationship with coaches, now we’re more comfortable, we have one big family, we all hold each other accountable.”

Returning “super” seniors are especially  motivated to suit up as a ‘Runner again. They are excited to be giving Traylor one more season and bringing their veteran experience to the field.

Safety Antonio Parks stressed,  “I have a lot of respect for Coach Traylor and his culture and everything he’s doing.  I’m just one of those guys who bought in to what he’s doing; I’m all about what he’s building here. I wanted to come back and have some more fun and make some more plays for him.”

Linebacker Charles Wiley agreed, “It starts with us; we should be the ones that put that pressure on each other to make each other better.”

Offensive lineman Jalyn Galmore also emphasized the team culture and leadership, “First of all, who wouldn’t want to play for a guy like Coach Traylor?”

The super seniors are aiming high.   Defensive lineman Lorenzo Dantzler made clear his ambition,“For me, it was coming back trying to bring the city of San Antonio a championship, I want to make history at this program.”

Finally, the leading scorer of 2020 and honorable mention All-American, kicker Hunter Duplessis shared some important insight on his extra year.

“There was no better team to come back to than UTSA football, so to have the ability to improve on my craft with the people that I love, a coaching staff that I love, it was hands down, I’m coming back no matter what,” Duplessis said.

We all know it may be early, but everyone knows the season starts in the off-season. With every individual buying into the same goal at this point of the year, this team is set to be dangerous come kickoff day. Coach Traylor and company seem to be on the right track to having a historic season.