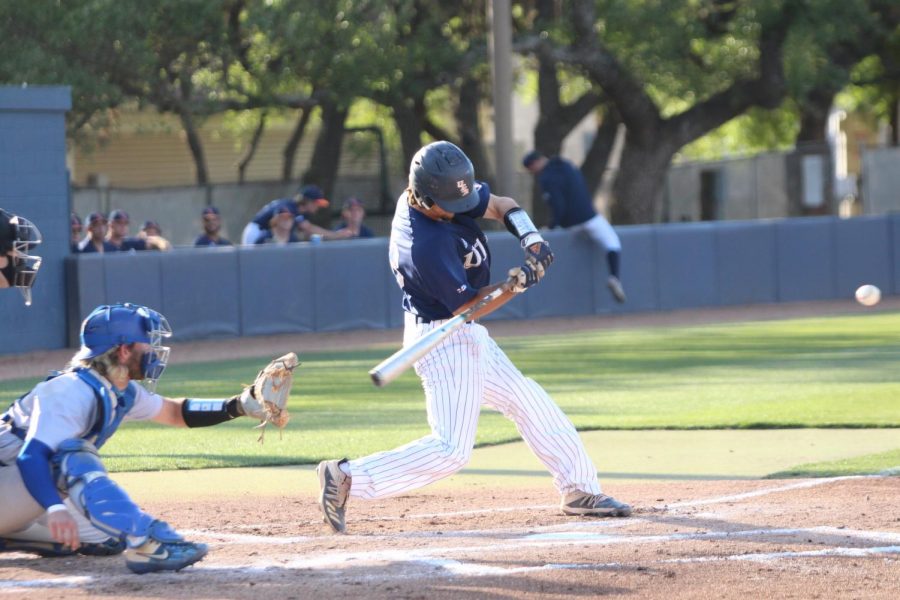 Nick Thornquist takes a swing at a pitch during a game earlier this season. Thornquist has brought tremendous power to the middle of the 'Runners' lineup as he currently leads the team in home runs with seven.

Coming off a series loss to the University of Charlotte (29-11, 17-3 C-USA) the previous week, UTSA baseball (17-17, 9-10 C-USA) was at home to take on the Rice University Owls (17-23-1, 5-14-1 C-USA) attempting to get back on track. The teams had previously met for a four-game series in Houston in March that served as the Roadrunners’ conference opener, and they took the series three games to one. This week’s four-game series proved to be a pretty clear summation of the ‘Runners’ season thus far, a solid offensive performance that was hampered by the team’s uneven pitching corps. UTSA dropped game one on Friday night and then the first game of the doubleheader on Saturday afternoon. From there, though, UTSA picked things back up, grabbing the last two games of the series to walk away with a split.

The action got started on Friday, April 23 and the game was the latest in a long series of missed opportunities for UTSA this year. Rice jumped out to an early 0-3 lead after two innings as the pitching tandem of Kyle Sonduck (0-0, 6.43 ERA) and John Chomko (0-2, 5.48 ERA) had trouble keeping batters off the basepaths. UTSA cut the lead to one in the bottom of the third when Chase Keng was hit by a pitch with the bases loaded, allowing Jonathan Tapia to walk home, and then a passed ball during the next at-bat let Dylan Rock come in to score. With the lead down to one, Chomko could not keep Rice in check, allowing back-to-back home runs to begin the fourth, extending the lead back to three at 2-5. The ‘Runners responded in the bottom half of the inning, though. With the bases loaded, Jonathan Tapia drilled a ball into the left center gap to score Ryan Hunt and Leyton Barry and cut the lead back to one. Griffin Paxton, the team’s current leader in batting average, then came through with a groundout that allowed Ian Bailey to score and moved Tapia over to third. Moving the runner proved to be key as a wild pitch let Tapia come in to score and hand UTSA their first lead of the game 6-5. They would not hold it for long, however, as a sacrifice fly off of Luke Malone (2-2, 4.29 ERA) tied the game at six in the fifth. Rice then retook the lead in the top of the sixth 6-8 in an inning marred by two UTSA throwing errors. UTSA was presented with opportunities with runners in scoring position in the bottom of the sixth and eighth, but could not convert on either chance and dropped game one of the series 6-8.

Game two of the series saw the ‘Runners get off to a fast start as back-to-back hits down the right field line by Rock and Nick Thornquist put two runners in scoring position in the bottom of the first. Keng converted on the opportunity with a sacrifice fly to score Rock, and the ‘Runners grabbed the early lead. Gifted an early lead by his offense, UTSA starter Jacob Jimenez worked an efficient two shutout innings, allowing two hits while striking out three. Jimenez was relieved in the third by Reece Easterling (1-0, 5.88 ERA), and from there, things began to fall apart for the ‘Runners. Rice took the lead in the third after a pair of singles to start off the inning put runners on, and then Rice converted on the opportunity with a pair of fielder’s choice groundouts to take a 1-2 lead. UTSA responded and tied the game at 2 after Joshua Lamb smoked a single into right field, allowing Rock to score his second run of the game. Not satisfied yet, the ‘Runners came back the following inning and a perfect sacrifice bunt by Josh Killeen scored Taylor Barber and UTSA regained the lead 3-2 after four innings. The lead did not even last for a single batter, however, as Rice tied things up in the top of the fifth with a leadoff solo homer. Once again, however, UTSA retook the lead in the bottom half of the inning as Rock hit a leadoff solo shot of his own, blasting this one over the left field wall. Clinging to a one-run lead after five, UTSA turned the ball over to Grant Miller (0-2, 6.75 ERA). This move, however, would not pay off for the ‘Runners as Miller allowed another leadoff home run and Rice tied the game back up at four. Miller recovered from there and retired the next three batters he faced to get out of the inning. A double in the top of the seventh spelled the end for Miller’s time on the mound, and the ball was turned over to Hunter Mason (5-5, 4.41 ERA) to keep the game tied. Mason was effective in relief but suffered some unfortunate breaks. A fielding error in left put the go-ahead run on third, and a sacrifice fly by the following batter saw Rice go back ahead 4-5. Mason struck out the next batter he faced, but the damage was done. A leadoff single from Kyle Bergeron in the bottom of the seventh gave UTSA hope, but Paxton, Rock and Thornquist were retired in order from there and Rice secured the comeback victory in game two by a final score of 4-5.

Perhaps tired of playing in tight games, UTSA decided to end the second game of the doubleheader in the first inning. After starter Kobe Jaramillo (1-0, 6.26 ERA) allowed a run to score in the top of the first, UTSA came back in a big way in the bottom of the inning, sending 15 batters to the plate and scoring nine runs to break the game wide open. Rice starter Matthew Linskey struggled with his command as he hit or walked the four batters he faced and was pulled before he recorded a single out. Things did not improve for Rice after the change, as another walk and hit by pitch grew the lead to 3-1. A fielding error by the first baseman on a hit by Barry scored another two and UTSA led 5-1 without even recording a hit. In all, UTSA put up nine runs in the first inning off of just three hits. UTSA led by nine after the second when Rice began to close the gap. Jaramillo allowed a double with the bases loaded, Rice’s Guy Garibay came around to score after an error out in right field and the lead was suddenly down to 5-10. Jaramillo allowed a solo home run by the following batter and his day was done after two and a third. Fresh off pitching just an hour or so earlier, Mason was called on once again out of the bullpen. After allowing the first two batters he faced to reach safely, Mason Struck out the last two batters of the inning to get out of the jam. A sacrifice fly from Lamb in the bottom of the third gave UTSA some added breathing room at 11-6. From there, Mason took over, retiring the next nine batters he faced heading into the seventh. A double from Tapia down the line in the sixth gave UTSA one more insurance run, but Mason would not need it, working his way out of a jam in the seventh to secure his fifth win of the season and giving UTSA the game three victory 12-6.

In the series finale on Sunday afternoon, the game started out as a pitcher’s duel. UTSA starter Simon Miller (3-1, 3.55 ERA) and Roel Garcia made it through the first three innings scoreless before Miller blinked first, allowing an RBI single down the right field line in the top of the fourth to give Rice the early lead 0-1. In the bottom of the fifth, Garcia ran into trouble, allowing the first three Roadrunners he faced to reach base safely and Rice went to the bullpen, rather than trusting him to work his way out of the jam. Paxton immediately made the Rice coaching staff pay for this decision, drilling a ball into the left center gap, scoring Bailey and Tapia and handing UTSA a lead they would not relinquish. A wild pitch allowed Chris Shull to cross the plate and then Chase Keng added the exclamation point to the inning, hitting a three-run moonshot over the wall in left center field, as UTSA led 6-1 after the fifth. Miller was relieved in the top of sixth and exited the game after a solid performance where he went five innings, allowing three hits, three walks, one run and striking out three. A single up the middle by Rock to score Shull extended UTSA’s advantage to six in the sixth inning. In the top of the eighth, UTSA’s lead was cut in half by a three-run homer by the Owls’ Austin Bulman, but UTSA reliever Daniel Garza (1-0, 3.78 ERA) recovered from there to escape any further damage. Intimately familiar with blown leads in the late innings at this point in the season, the ‘Runners left nothing to chance as their offense exploded in the bottom of the inning to plate five runs thanks to an RBI double from Thornquist, a two RBI double from Bailey and a two RBI single from Paxton that just managed to stay fair. Malone came on to pitch the ninth for UTSA and retired the side in order as UTSA secured a 12-4 victory in the series finale, earning a split of the four-game set.

The series split keeps UTSA at .500 on the season and one game under .500 in Conference play. The ‘Runners currently sit fourth in the West division of Conference USA. UTSA will head out on the road for their next series from Friday, April 30, through Sunday, May 2, when they take on the University of Alabama at Birmingham Blazers (13-27, 6-14 C-USA). All games will be available to watch on CUSA.tv.