Black Widow is a total poser 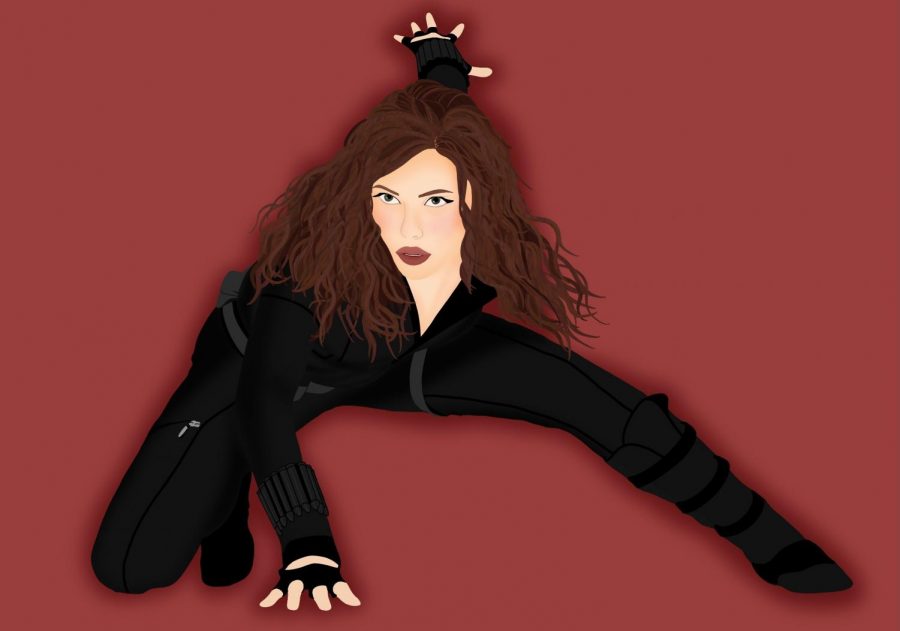 Marvel Studios’ gave their fans one final taste of the beloved Natasha Romanoff in their newest movie release: “Black Widow.” This movie has stunned fans worldwide with its take on trafficking young girls, bringing a whole new feel to Marvel films which are usually lighter.

In the Marvel Cinematic Universe timeline, “Black Widow” falls in line between “Captain America: Civil War” and “Infinity War”. The film follows Natasha Romanoff, a trained assassin and avenger that is first introduced in the Marvel Studios film “Iron Man 2,” as she figures out what her next step is after the events of “Captain America: Civil War” left her running to hide out. She manages to make herself comfortable within her new life until a package arrives carrying a trinket from her past life, before the Avengers. She goes on to track down her sister, Yelena, who she had not spoken to since childhood. Yelena becomes a fan favorite with her witty banter and charming accent, while also being a badass alongside Natasha. Together, they share stories about their trauma after growing up in the “red room,” a place where young, trafficked women are taken to be mind-manipulated into becoming harmful assassins. Natasha and Yelena decide to locate their parents in order to take down the head of the red room and free the trafficked women, also known as “black widows.” This movie showcases high intensity fight scenes in places such as Budapest and Ohio. Throughout the movie, Natasha rebuilds her relationship with her past family, all while fighting to save the lives of the many Black Widows.

Going into the theatre on premier day, I expected the movie to be a prequel of Natasha’s life before becoming an Avenger, but instead I got to witness her life after she fled from the previous movie. Black Widow was unlike any of the previous Marvel films that have been released and because of that I personally believe it will go down as one of their best. The way they tied human trafficking into the story has left massive imprints on young girls, including myself and really brought light to such a dark matter. This film had many incredibly witty and hilarious scenes, but nothing compares to the heavy opening credit scene. Movie goers should take note of the heavy opening scene which, like the rest of the film, was so unlike Marvel. Even the song, Smells Like Teen Spirit covered by Malia J, was surprising.

Another thing that made my heart warm and fuzzy was this vest Yelena wore. I know it might sound like a weird thing to love, especially if you have not watched the movie, but this vest surprisingly had a huge part in not only this movie but in Infinity War as well. Yelena is extremely fond of her vest, and shares the love with Natasha which creates cute bonding moments with them throughout the film. There are many other small details that really tie the movie together, for example Yelena really likes to poke fun at Natasha over her so-called “fighting pose” that she has been seen doing in previous movies. Yelena follows this up by calling Natasha a “total poser” throughout the film, which really adds a fun element.

All in all, this movie proves how talented the Marvel makers are because each installment gets better and better. Not only did I fall in love with the characters and this film as a whole, but now I am highly impatient for what else is to come from Marvel Studios. With each film, they branch out with different social issues and add exciting new features which always inflicts the element of surprise with fans. Marvel will continue to grow their platform and I am so proud to be part of such an incredible fandom.