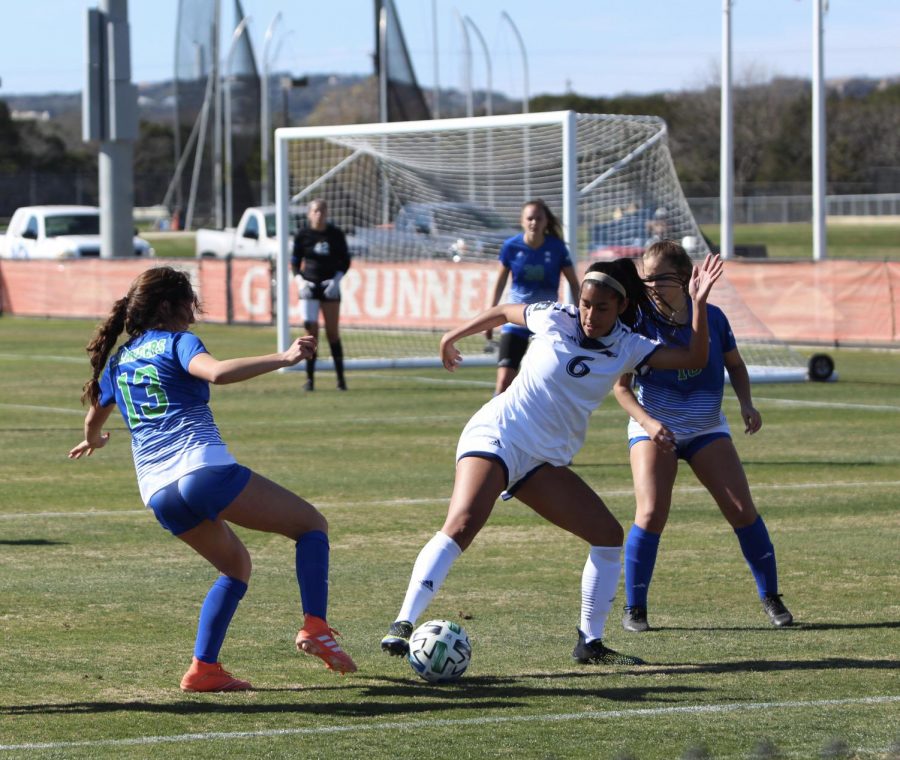 UTSA forward Ariana Gomez battles with a defender for the ball during a game against the Texas A&M-Corpus Christi Islanders last season. UTSA will take on the Islanders this week in their sixth ever meeting. Julia Maenius\The Paisano

The UTSA Roadrunner soccer team (3-1) secured their first three victories of the season this past week. They prevailed over the University of Tulsa in Stillwater, Ok., on Sunday, Aug. 22, California Baptist University in the ‘Runners’ home opener on Thursday, Aug. 26 and Grand Canyon University on Sunday, Aug. 29. The wins helped UTSA bounce back from a season opening defeat to Oklahoma St. by a score of 0-2 on Aug. 19.

The action got started in Stillwater, where UTSA came out strong against Tulsa and never looked back. The ‘Runners registered the first three shots of the game within 15 minutes of kickoff. Tulsa responded in kind and began to apply some pressure, registering three shots of their own in the next five minutes. With a corner kick in the 23rd minute, the ‘Runners would strike first as senior defender Kendall Kloza found the back of the net and gave UTSA the early 1-0 advantage. From there, UTSA controlled play for the rest of the first half with two more shots on goal by Kloza and senior forward Lexi Bolton being saved by Tulsa keeper Emma Malsy. UTSA entered halftime with their one goal lead intact.

Tulsa started the second half exerting massive amounts of pressure on the UTSA defense, but the ‘Runners held strong. 20 minutes into the half, however, the game was broken wide open. In the 66th minute, fifth-year super senior forward Ellis Patterson buried a shot past Malsy to double the ‘Runners’ advantage to 2-0. Not content with a two-goal advantage, however, UTSA struck again immediately with freshman midfielder Jordyn Hyland delivering the third goal of the evening, putting the game out of reach. From there, UTSA was in cruise control and preserved the shutout victory to earn their first win of the season. Junior keeper Jil Schneider was solid in net for the ‘Runners registering three saves.

Building off of their first win of the season, the ‘Runners picked things right back up from where they left off on Thursday against California Baptist University. Freshman midfielder Anna Sutter got things started immediately for UTSA, scoring on the first shot of the game in the 4th minute to hand UTSA the early 1-0 lead. UTSA continued to press their advantage with a further two shots that could not find the mark. However, in the 14th minute UTSA’s aggression was rewarded when Patterson fired a ball past California Baptist keeper Romane Salvador to double UTSA’s advantage. The goal was a big mark for Patterson as it moved her to 18 goals and 49 points in her career, which both rank third in school history. UTSA was not quite done with the opening barrage, however, as in the 21st minute Sutter scored her second goal of the game to hand the ‘Runners a 3-0 lead they never relinquished. From there, UTSA rode strong defense to the end of the game and walked away with their second victory of the week.

The ‘Runners’ third game against Grand Canyon University was nowhere near as lopsided as the two games prior. Both teams came out and battled hard with neither team generating much in the way of offensive chances in the first half. Schneider was called on by UTSA to make one save, but that was all she had to do in the first half. Things picked up quickly in the second half, however, when senior midfielder Isa Hernandez converted a penalty kick for UTSA in the 61st minute to give them a 1-0 lead. Sensing vulnerability the ‘Runners kept the pressure on and were immediately rewarded when junior midfielder Sarina Russ found the back of the net to double UTSA’s advantage. Not content to go away quietly, Grand Canyon University’s Marleen Schimmer snuck a shot past Schneider to cut the deficit to one in the 86th minute, but that was as close as they got as UTSA secured the 2-1 victory.

UTSA soccer will next be in action on Wednesday, Sept. 1, in Corpus Christi to take on the Texas A&M-Corpus Christi Islanders (1-1). The game can be seen on the Islander Digital Network.