UTSA Volleyball takes one of three at Ole Miss invitational 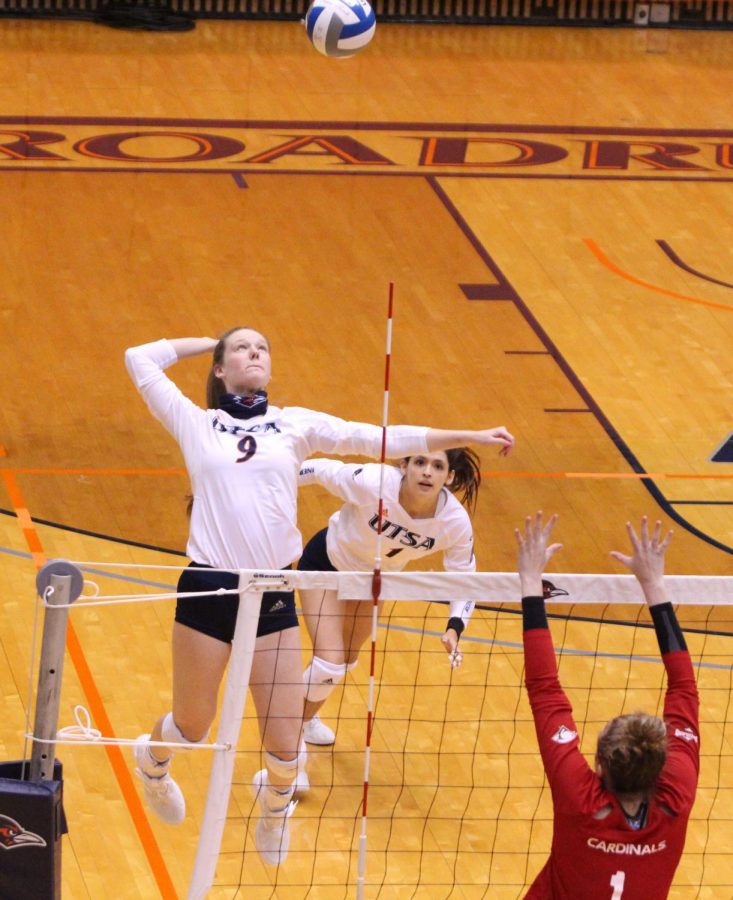 Kelsey Carpenter prepares to spike the ball during a game last season against UIW. Carpenter has appeared in every match for UTSA this season and registered a season high eight kills against Coastal Carolina on Saturday night. Julia Maenius/The Paisano

The UTSA Volleyball team (1-4) was on the road in Oxford, MS. this past weekend to take part in the Ole Miss Invitational. The team played in three matches and managed to secure their first win of the season, but otherwise found little success.

The action got started on Friday afternoon against the Ole Miss Rebels (5-0). UTSA started well in the first set, but a series of long scoring runs by the Ole Miss offense midway through the set handed them a lead they would not relinquish, taking the set 18-25. The second set started nicely for UTSA with a 4-0 scoring run, but the Rebels slowly chipped away at the lead, eventually surpassing the ‘Runners and taking the second set 20-25. The third and final set saw Ole Miss seize control early, racing out to a 7-1 lead. UTSA attempted to close the gap, but never got close enough to threaten Ole Miss, and the Rebels put an exclamation point on the match with a 5-0 scoring run to close out the set and the match 14-25. Kirby Smith led the ‘Runners in kills for the match with eight.

UTSA saw much more success in their game on Friday afternoon against Northwestern State (1-6). A tight first set between the two teams was broken open midway through when the ‘Runners unleashed a 6-0 scoring run. From there they held on to take the first set 25-16. The second set was a similar story, with both teams trading the lead before UTSA went on a dominant run late in the set to put it away 25-16. Northwestern State came out much stronger in the third set, staking claim to a 7-12 lead midway through the set, but it would not last. UTSA came roaring back with a massive 18-3 scoring run to close out the game and the third set 25-15, claiming their first win of the season in straight sets. Hannah Lopez led the way offensively for UTSA with eight kills in the match.

Finishing up their weekend on Saturday morning, the ‘Runners took on the Coastal Carolina Chanticleers (3-2). A back-and-forth set between the two teams, that featured multiple scoring runs by both sides, eventually saw the Chanticleers just edge ahead to take the first set 20-25. Set two saw the ‘Runners respond, however, using the strength of a 6-0 run midway through the set to draw level at a set apiece after taking the set 25-18. The Chanticleers delivered a crushing counter punch in the third set leading by as many as 12 before eventually settling for a 15-25 third set win. Not content to go away, the ‘Runners played a much tighter fourth set, sitting just one point back of the Chanticleers at 13-14 midway through. From there though, the momentum began to shift and despite the ‘Runners saving two match points, the Chanticleers were eventually able to close the set and match out 22-25. Lopez led the ‘Runners for the second consecutive match in kills with 20 kills.

UTSA volleyball will return to San Antonio next, across town, when they take on the University of the Incarnate Word Cardinals at 6 p.m. on Tuesday, Sept. 7.