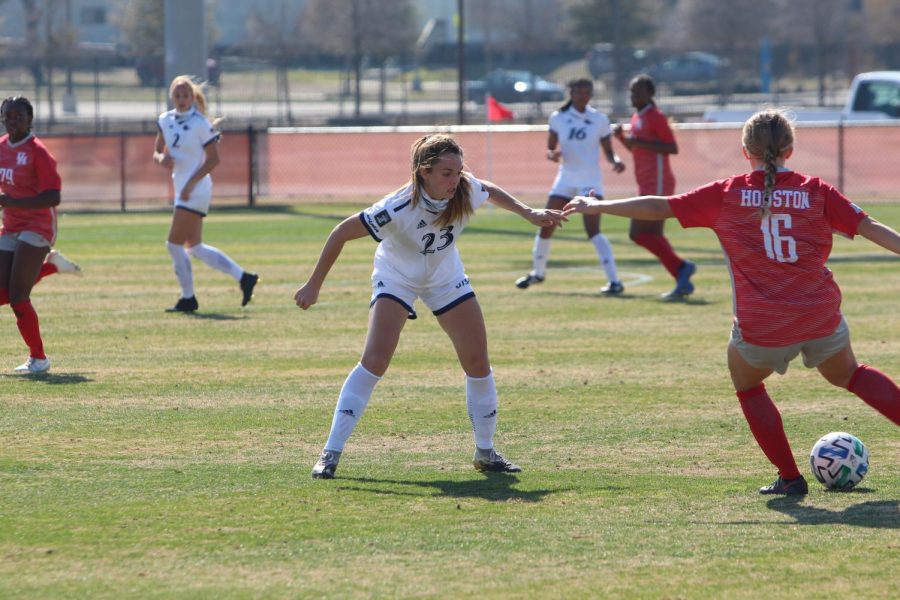 UTSA defender Alex Granville tracks the ball during a game against Houston last season. The junior from Maitland, FL, has started all six games this season for UTSA after starting all 11 games last season. Ryan Garza/The Paisano

The UTSA soccer team (4-2), fresh off of tying the record for the best start in school history the week prior, was in action in two games last week. The ‘Runners took on the Texas A&M-Corpus Christi Islanders (2-3) on Wednesday, Sept. 1, in Corpus Christi to start the week off. The ‘Runners played a close game, coming away with a 1-0 victory to set the record for the best start in school history and bring their unbeaten streak to four. The streak came to an end in their second game of the week, however, on Sunday, Sept. 5, in Lubbock, when they fell by a final score of 0-3 to the Texas Tech Red Raiders (5-0-1).

The action got started on Wednesday night in Corpus Christi, and UTSA was in the business of generating chances early. Islanders keeper Kennedy Stelling was called upon early and often by Corpus Christi as the ‘Runners peppered the net with shots, forcing her to make four saves within the first 30 minutes of the game. Finally, in the 32nd minute, UTSA was rewarded for their aggression. Off of a corner kick Ellis Patterson delivered a ball into the box and Kendall Kloza got her head on it, nodding it into the back of the net for her second goal of the season and handing UTSA a 1-0 lead. The margin would hold until the end of the first half, with UTSA outshooting Corpus Christi 13-3. The second half saw UTSA come out with a more conservative game plan as they were content to sit on their lead. The Islanders registered just one shot in the second half in the 62nd minute but missed, and the ‘Runners walked away with the 1-0 road win.

The ‘Runners were not met with the same positive result on Sunday night, however, as their attack never got going against the Red Raiders. A feeling out process between the two teams was broken in the 30th minute when Texas Tech’s Hannah Anderson sent a header off of a corner kick past a diving Jil Schneider to give the Red Raiders a 0-1 lead. The first half came to a close, and UTSA registered no shots in the half. UTSA continued to hang tough in the second half keeping Texas Tech within one, but eventually the ‘Runners defense on set plays bit them again. Texas Tech scored back-to-back goals off of corner kicks in the 65th and 71st minutes to take a commanding 3-0 lead and held that lead until the end. The final result weighed heavily in favor of Texas Tech as they outshot the ‘Runners 2-15.

The ‘Runners will next be in action on Friday, Sept. 10, at 7:30 p.m., in San Antonio when they take on the Lamar University Cardinals (2-3) in the first game of the Drury Hotels Invite. The game can also be seen on CUSA.TV.