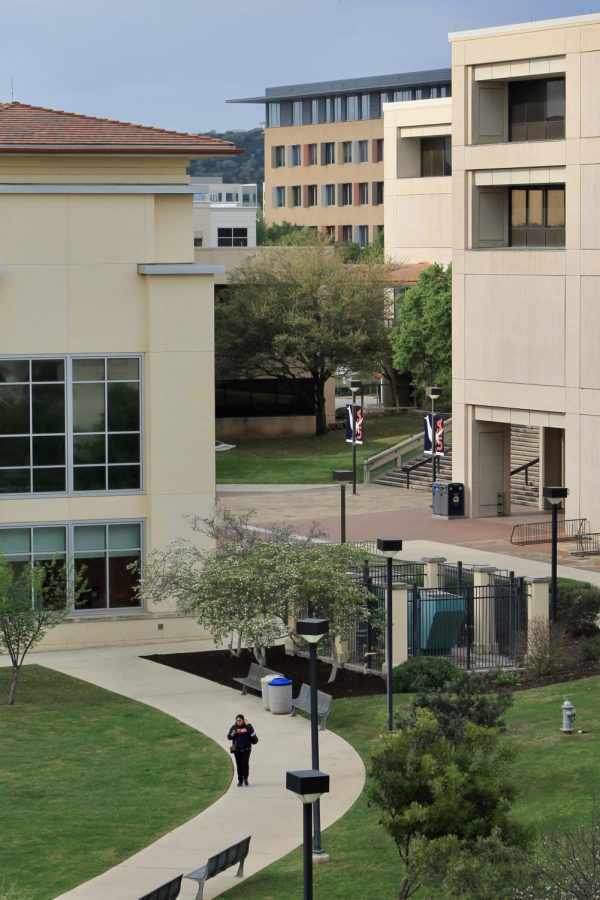 Various high traffic areas both pre-COVID and during.

Last week, in an email from President Eighmy, the university announced fully in-person and hybrid instructions, as listed in ASAP, would resume on September 13.

Student Body President Jose Escobedo voiced his multitude of concerns about the resumption of in-person classes.

“At first I was surprised,” Escobedo said. “I would say I am more cautiously optimistic, if that’s what you want to call it. I do disagree with some points that were made in the email. This is one of the situations where I pray that I am wrong and that he is right. I am hoping for the best here, but I can’t help but think of the worst.”

This follows the announcement, made more than a week before the semester started, that most face-to-face classes would be done online to manage the COVID-19 Delta variant surges in San Antonio. Escobedo touted this as a smart decision, but also noted the university’s disregard for the impact the decision could have on students who are not able to adjust to in-person learning with ease.

“When the initial decision was made to do a three-week hiatus, that was a good decision,” Escobedo said. “However, they did leave the door open when they said they would know more and made a decision as they got closer to that date to go back in-person. That was the only thing that left us in the dark, which was fine at the time because we assumed we would get an answer with ample time, or make tentative arrangements. I don’t think we expected to get that email less than a week before.”

Escobedo pointed to situations where students — who are attempting to get living situations in order and trying to fulfill their living needs —  are strained for time by the lack of communication from administration.

“There are questions from students already asking where they can get parking permits and things along those lines,” Escobedo said. “I had a student in my class who said, ‘I don’t live there, I don’t have time to get an apartment. Is there going to be an option to do it hybrid?’ The professor didn’t really answer. As far as communication goes I am sure they did everything they thought they could do, in their minds, but I don’t think it was enough.”

Various restrictions have been put in place since the start of the pandemic, yet when examining what the particular precautions and restraints would be upon returning to campus, there was information left to be desired.

“If these precautions are in place, I don’t know about it,” Escobedo said. “Restrictions are part of the plan, but they did not state it in the email, or talk to us about it. A lot of this is to say there is anxiety among the student body and I don’t think they have done enough to quell their anxiety. Pretty much the message has been, and what I have been receiving from students, is it’s more of a free for all at this point.

According to President Eighmy’s email, San Antonio appears ‘to be past the peak of the COVID-19 Delta variant surge.’ Escobedo disagreed in the sense that perhaps San Antonio is “past” Delta, but there are more nuances that may be cause for concern.

Escobedo elaborated on the dangers of mutations and the frightening idea of a variant resistant to vaccines.

“What I am worried about is mutations and obviously the more transmissions we have the more chances we have for mutations,” Escobedo said. “You would think they would consider that and so that’s why I am surprised by this decision because it seems too optimistic.”

Also mentioned in President Eighmy’s email was the positivity rates within UTSA being below that of Bexar County. The statistic was brought into question when Escobedo noted that UTSA “becomes one” with San Antonio in certain instances, but distances itself in others.

“I understand that they consulted with health experts, but when we talk about UTSA and we talk about San Antonio we always have this message that ‘we are the city and the city is us,’ so when it comes to this I can’t help but think, why are we detached in this instance?” Escobedo said.

Escobedo went on to discuss the possible alternatives that UTSA could have taken instead of resuming amidst the still concerning pandemic. He described analyzing foot traffic and classroom size to ensure there is space. For large classes, Escobedo suggested splitting them into smaller groups with one group coming earlier in the week and the other group coming later. Again there was also an emphasis on the lack of communication between administration and the students.

“All of this isn’t to say that we should never come back in-person at this point with the vaccine and masks being a personal responsibility; it’s ultimately going to be up to us, as students, to do our part,” Escobedo said. “We were going to come back in-person either way, my suggestions would have been a gradual approach.”

Escobedo emphasized the importance of making smart decisions during this capricious time.

“Obviously, wear your mask, get vaccinated if you can and make smart decisions,” Escobedo said. “We have options and as adults it’s our decision to make. We have to do our part at this point, there is no going back, so let’s try and make the best out of this situation.”

Escobedo shared his advice for students who haven’t seen campus in more than a year.

“It’s going to be a hard time for everyone, so we need to be more comfortable asking for help,” Escobedo stated. “My advice has always been this: at the end of the day we have each other, but the only ones we can really rely on are ourselves and the students around us.”