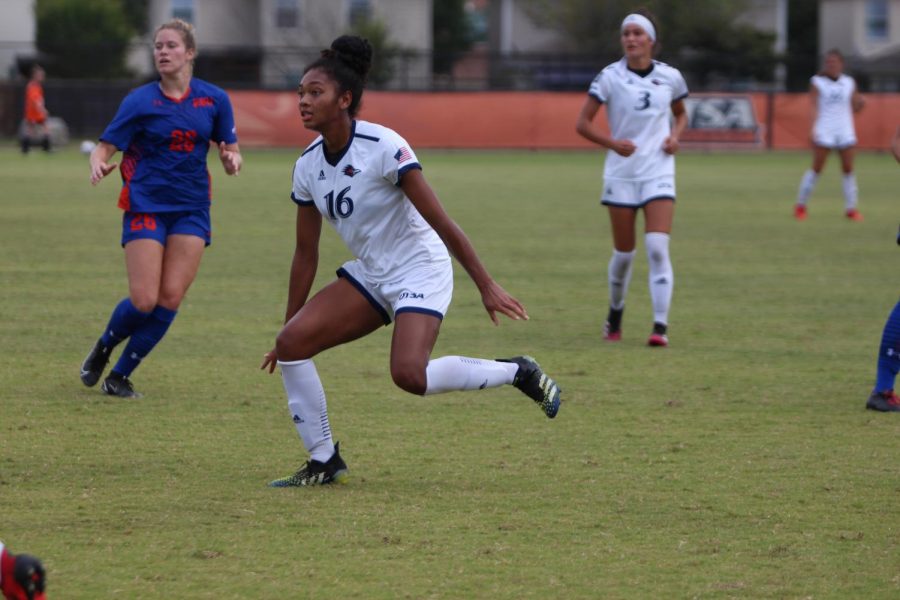 Sasjah Dade readies herself to intercept a pass during the 'Runners game against Houston Baptist earlier this season. Dade has appeared in all eight games for UTSA to start the season with seven starts after starting all 11 games for the 'Runners a season ago.

UTSA soccer (5-3-1, 0-1-0 C-USA) kicked off their conference schedule on Thursday night at home when they took on the Old Dominion Monarchs (5-2-0, 1-0-0 C-USA). Despite demonstrating themselves to be the more aggressive team throughout, a slow start left the Roadrunners unable to claw their way out of the hole.

The first 10 minutes of the game were a feeling-out process as both teams registered just a single shot, neither of which were on goal. This changed in the 11th minute, however, when Old Dominion’s Morgan Hall put her head on a cross from Megan Watts to direct the ball past UTSA keeper Jil Schneider to hand the Monarchs an early lead. UTSA pushed for an equalizer over the next 10 minutes, but shots by Ellis Patterson and Isa Hernandez were stopped in their tracks by Old Dominion keeper Kasey Perry. This proved to be the case for the rest of the half as the ‘Runners outshot Old Dominion 8-5, but the equalizer would not materialize.

To start the second half, Old Dominion again took advantage before the ‘Runners could get back into their rhythm. Old Dominion’s Emily Garrick took a cross from Carla Morich and fired a ball into the back of the net to double the advantage for the Monarchs to 0-2. Facing a two-goal deficit, UTSA knew they had to push hard to close the gap. They responded accordingly, pushing the ball upfield and generating numerous chances on goal, but nothing could get past the arms of Perry. Subsequent corner kicks in the 58th minute offered UTSA a golden opportunity to cut the lead in half, but neither bore fruit and the ‘Runners remained down by two. UTSA continued to push for an opening goal and a sequence of three straight shots by the ‘Runners in the 73rd minute saw them come close, but Kendall Kloza, Deja Sandoval and Marlee Fray were all denied.

This proved to be the last solid string of chances the ‘Runners had in the game and Old Dominion, content to sit back and play defense, absorbed the pressure and came away with a 0-2 victory on the road. The ‘Runners ultimately outshot the Monarchs 18-11, but the teams tied with five shots apiece in shots on target. Schneider put up a respectable effort in goal, registering three saves, but couldn’t match her counterpart on the other side of the pitch, as Perry registered five saves for the Monarchs.

The ‘Runners will look to put their opening loss in conference play behind them on the road next week in El Paso when they take on the UTEP Miners (2-7-0, 0-2-0 C-USA) on Friday, Sept. 24, at 7 p.m. UTSA holds 1-7-2 record all-time against the Minters, but that singular victory came last season in a 2-1 victory. The game can also be seen on CUSA.tv.