Down 21 after first quarter, UTSA comes storming back for walk-off 31-28 victory 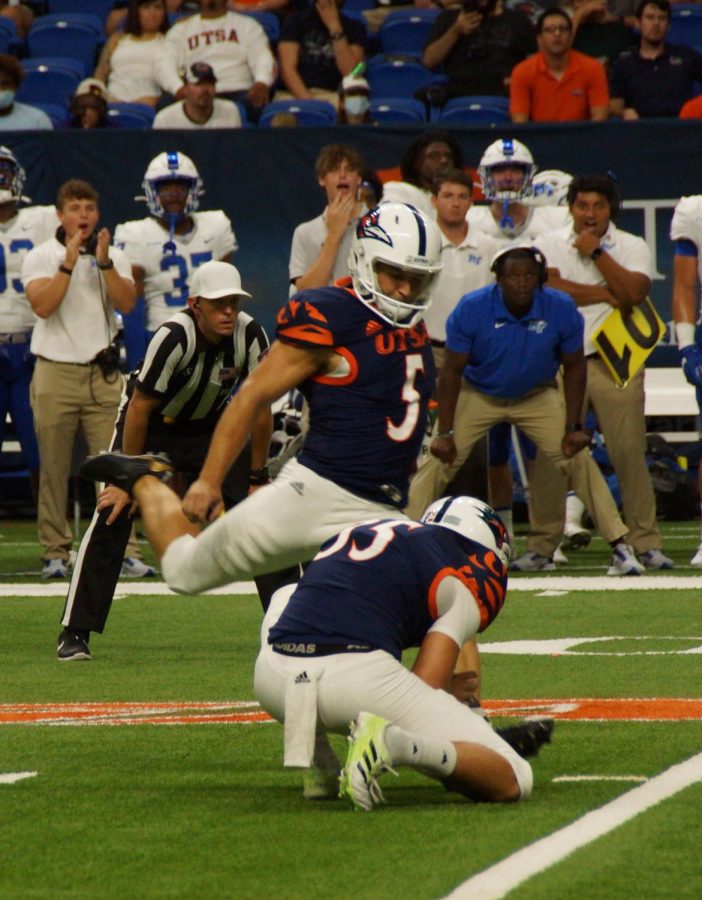 Hunter Duplessis kicks a field goal during last week's game against MTSU. Duplessis has made 83.33% of his kicks at uTSA and has two carer game-winning field goals. Dustin Vickers/The Paisano

The UTSA Roadrunners (4-0), were on the road this week to take on the University of Memphis Tigers (3-1). The ‘Runners overcame a nightmare start that saw them fall behind 0-21 after the first quarter to come storming back and win the game with a walk-off 42-yard field goal from Hunter Duplessis as time expired. Leading the way offensively for the ‘Runners was Sincere McCormick who turned in a workhorse performance, carrying the ball a school record 42 times for 184 yards and three touchdowns. The 21-point comeback for the ‘Runners was the largest in school history.

The first quarter started in about the worst way imaginable for UTSA after the defense forced a three and out from the Memphis offense to start the game, the ‘Runners’ first offensive snap saw them penalized for a chop block. Their second snap was over the head of Frank Harris and went into the endzone, where the Tigers fell on it for the early lead. UTSA then went three and out on their next possession, and Memphis drove right down the field and punched it in on the ground from seven yards out to hand Memphis a 0-14 lead. Another three and out from the UTSA offense indicated a team that could not get in gear and the Memphis offense made them pay once again. After converting a fourth and one on their own 28, Memphis quarterback Seth Henigen utilized a play fake and took a shot deep, hitting a streaking Calvin Austin III down the middle for a 60-yard touchdown and putting UTSA’s chances on life-support early. Another punt from UTSA brought their first quarter to a close as they had zero total yards of offense.

Early in the second quarter the UTSA offense finally found a tiny semblance of rhythm as they drove 87 yards in 12 plays with McCormick finishing the drive off with a physical 12-yard touchdown run to bring the score to 7-21. The second quarter was a standout one for the UTSA defense as they forced three consecutive three and outs and held Memphis to just 13 yards of offense. UTSA would threaten to draw even closer midway through the second quarter, but the offense turned it over on downs just inside the Memphis 35. One final possession to end the first half did not amount to anything and UTSA entered halftime down 7-21.

After their first offensive possession to start the second half ended in a punt, the UTSA defense made a key stop inside their 35 forcing a long field goal attempt from Memphis which missed wide to the right. Given great field position, the ‘Runners marched down the field and from eight yards out, McCormick took a handoff, cut it back and broke into the open field for a walk-in touchdown to draw UTSA within seven. Memphis had a response as Henigan hit Austin III and tight end Sean Dykes on multiple big completions before Brandon Thomas ran it in from a yard out to restore Memphis’ two-touchdown edge.

Not content to go away though, UTSA responded with a long touchdown drive and early in the fourth quarter Harris found Zakhari Franklin on a quick slant route for a seven-yard touchdown and cut the lead down to 21-28. Directly afterward, the ‘Runners made the biggest play of the game up to that point when UTSA’s Clarence Hicks broke through the line off a blitz and strip-sacked Henigan and the ball was recovered and returned by Lorenzo Dantzler all the way down to the Memphis seven. The ‘Runners advanced the ball down to the one but were faced with fourth and goal. With the game hanging in the balance, the ball went to McCormick and he delivered, finding a hole and slipping into the endzone to tie the game at 28.

Memphis advanced the ball quickly down the field, and made it inside the UTSA 25, but then the ‘Runners came up with another huge defensive play. Thomas took a handoff up the middle and while fighting for extra yardage, was stripped at the last possible second by Kelechi Nwachuku and UTSA recovered. The team committed heavily to the run on the ensuing drive and bled a lot of time off the clock. Facing a fourth and one Coach Traylor made the call to keep the offense on the field and went for it, but they were stopped and Memphis took over. The UTSA defense held strong, aided by a holding call on Memphis that wiped out a 40-yard completion for Henigan, forcing a Memphis punt. UTSA got the ball back with under three minutes left in the game.

The ‘Runners slowly and deliberately worked the ball down the field and with under a minute to go McCormick broke a 22-yard run to the Memphis 24 for a first down and setting the stage for Duplessis. After bleeding Memphis of all of their timeouts and taking their final timeout with two seconds left on the clock, Traylor sent out Duplessis to win the game with a 42-yard field goal. Duplessis sized up the kick and got set. The snap and hold were good and right off his foot the kick was good, soaring through the uprights and sending UTSA storming onto the field in celebration as they completed the biggest comeback win in program history 31-28.

UTSA will look to improve to 5-0 next week when they return home to the Alamodome on Oct. 2, at 5 p.m. against the UNLV Rebels (0-4). For those unable to attend in person the game will be available on ESPN+.