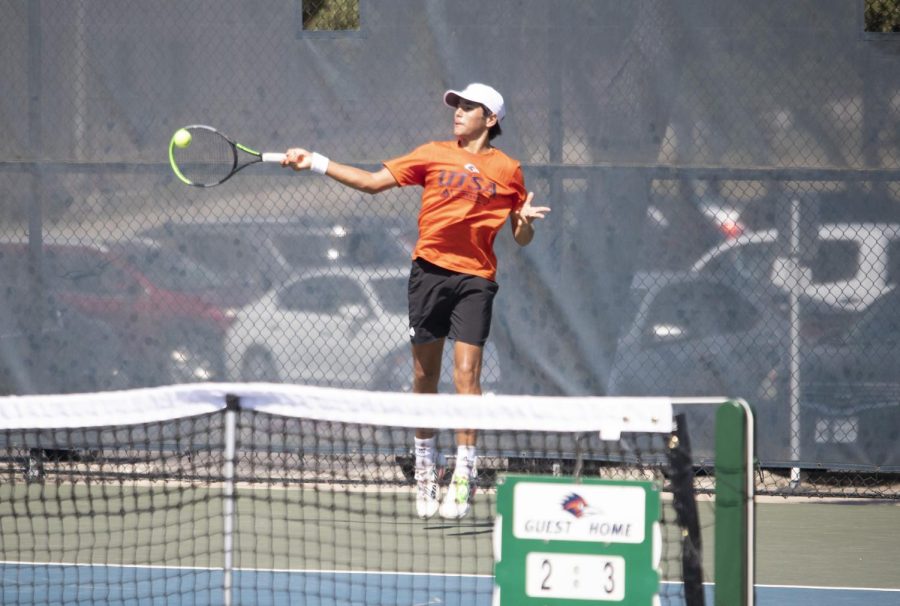 Miguel Alonso returns a ball during Sunday's championship match. Alonso, a freshman from Veracruz, Mexico, won a singles championship in only his third tournament at UTSA. Dalton Hartmann/The Paisano

The UTSA tennis squad was home in San Antonio last week for the UTSA Roadrunner Invitational. With the tournament split up into numerous smaller singles draws due to the number of players in attendance, there were ample opportunities for UTSA to pick up some victories and that is exactly what they did. Slava Gulin, Joao Ceolin and Miguel Alonso all won their singles championships in a solid tournament for the ‘Runners.

Gulin enjoyed a run through his draw, starting with a 6-4 7-6 victory in the round of 16 over Kyle Sillman of SMU. Then in the quarterfinals, he dispatched the number one seed in his draw, Miguel Cabrera of UT Arlington 7-6 6-0. He then caught a break in the semi-finals when his opponent, Ivan Smith from UIW, withdrew due to injury, sending Gulin into the finals. In the finals, he took on Solano Caffarena from UT Arlington and in a tightly fought match, Gulin took home the championship in three sets 3-6 6-4 10-7.

Ceolin, the number one seed in his own draw, lived up to his billing by storming to the championship. In the round of 16, Ceolin dispatched his opponent Avery Zavala from Arkansas 6-1 6-4. Then in the quarterfinals, Ceolin repeated the feat, sweeping Mykhailo Kvantaliani from UTRGV 6-3 6-4. The semi-finals between Ceolin and Alan Sau of UT Arlington was a much tighter affair, but Ceolin managed to come out on top 6-3 3-6 10-7. Ceolin rediscovered his dominant form in the championship, claiming the title over Daniel Linkuns-Morozov from Abilene Christian University in straight sets 6-4 6-3.

Alonso pulled off what was likely the upset of the tournament, entering his draw as the lowest-ranked seed in 16th. Alonso proved that did not matter to him, though, as he marched his way to the title. Taking advantage of a bye in the round of 16, Alonso’s first action came in the quarterfinals where he took on Pietro Perego from UIW. A back-and-forth game saw Alonso hang on for a straight sets victory 6-3 7-5. In the semi-finals Alonso found himself in another tight battle against Ricardo Alban from UT Arlington, but he pulled through with a 1-6 6-1 10-3 victory. In the finals, Alonso was up against Oswaldo Cano Sosa from Abilene Christian University and Alonso showed little in the way of nerves, dispatching his opponent in straight sets 6-4 6-1 to allow the freshman to claim his first title for UTSA.

UTSA will be back in action Oct. 2-10 at the ITA All American in Tulsa, Okla.