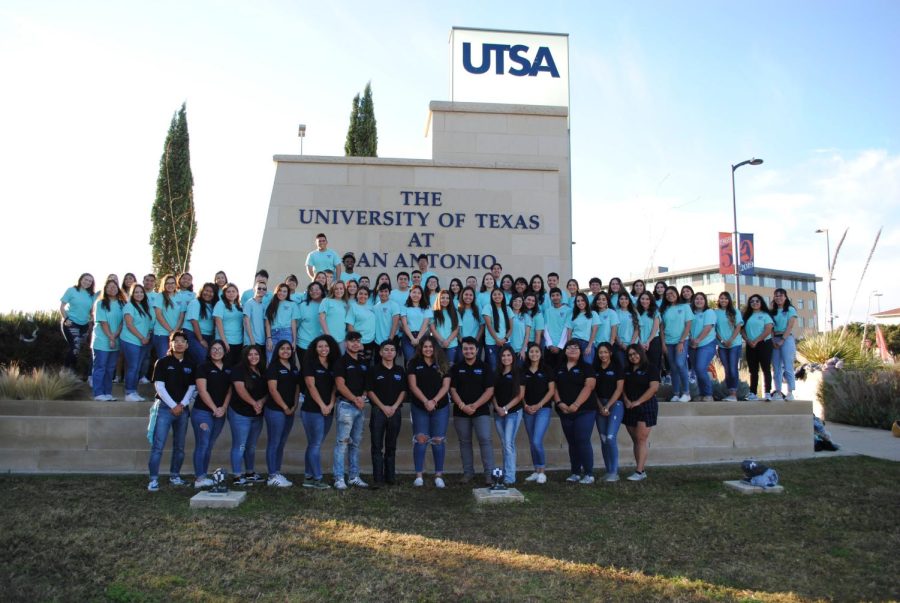 Established in 1995, the Hispanic Student Association (HSA) is a service organization which offers a place of community at UTSA for Hispanic students and those who appreciate Hispanic culture. Whether it is through community service, organization events or general meetings, HSA promises memorable experiences and friendships that last a lifetime.

Daisy Guzman serves as the president of HSA. She is a senior majoring in business management with a concentration in human resources. A member since 2019, she has made it a personal goal to cultivate an environment for HSA that allows members to feel welcome and wholly understood. Guzman highlighted a principle central to the culture of HSA.

“To describe HSA in one word, it would be ‘familia.’ There is so much diversity within the organization: whether it’s personality-wise, or with goals and ambitions. You are guaranteed to find something in common with people here,” Guzman said. “I want everyone here to mingle with one another … I really want the true ‘familia’ experience where you’ve made an effort to speak to everybody.”

As a service organization, HSA prides itself in fulfilling the needs of the communities that make up UTSA and San Antonio. Guzman shared insight about the organization’s initiatives.

“We’re listed as a community service organization on campus, so that is a big part of us … in the past, we have volunteered with San Antonio Pets Alive. We’ll donate toys to the animals there and walk the dogs,” Guzman said. “In the spring, we also do our citizenship clinic, where we help people fill out their citizenship forms. We help those who don’t speak English by translating for them.”

In addition to its commitment to community service, HSA also aims to inspire student interaction. The integration of a buddy system within the organization gives new members a chance to form close relationships with those who have been in HSA for some time.

“The newly recruited members will fill out a form to give the executive board a background of their personality and their interests. We also pay attention to who is interacting with who, and that is how we form the buddy system … it’s to make sure that you always have someone in mind to be around,” Guzman said.

In the beginning of the pandemic, HSA struggled with member involvement, which in turn has made the officers excited to host events like Bienvenida, HSA Live and Pachanga. The three major events give members the opportunity to relax and unwind at the end of the academic semesters.

“Bienvenida is basically the induction ceremony for HSA. It’s for new members … HSA Live is like a big talent show for the members, and I’ve only ever heard good things about it,” Guzman said. “Pachanga is a formal or semi-formal event that takes place at the end of every Spring semester that is filled with music and memorial moments, and where awards are given out to outstanding HSA members.”

Guzman emphasized the impact HSA has had on her college career. At her first ever general meeting, she was apprehensive about joining, but the welcoming atmosphere drew her in. During her time in HSA, she has learned much about herself and where service organizations can lead others.

“I would not be the same person had I not gone to my first meeting … It has shown me how much being open and inviting as a person can do for you. You never know where a conversation is going to lead you, or how that conversation might affect the other person. [HSA] has definitely opened my eyes to always embracing any opportunity, any person, any conversation with an open mind,” Guzman said.

“I have made nothing but good memories here …  I have made really long-lasting friendships, and both of my buddies are my roommates … it is an overall great way to make beautiful memories in college.”

HSA is currently hosting a “Spooky Basket Giveaway” to raise funds for their events this semester. Students who would like to support the fundraiser or get involved with HSA, find them on Instagram, Twitter and TikTok: @HSAatUTSA.