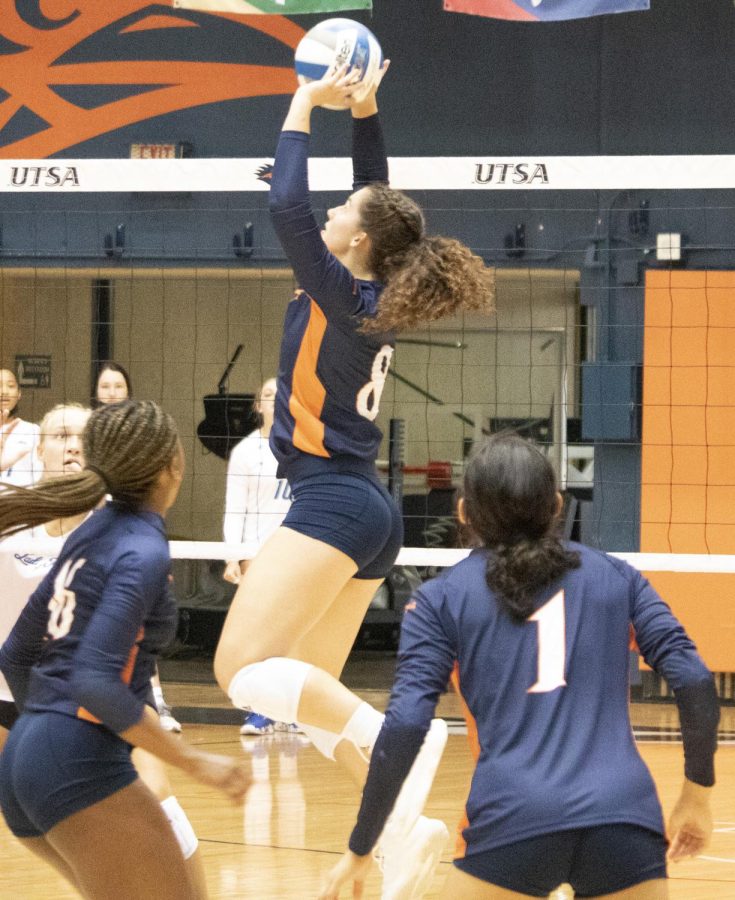 Courtney Walters sets the ball during a game earlier this season. Walters has appeared in 18 matches this season and has recorded 413 assists. Dalton Hartmann/The Paisano

The UTSA volleyball team (7-13, 4-4 C-USA) split their matchups against the University of North Texas Mean Green Oct. 20-21. Taking both matches to four sets, the Roadrunners were able to clinch a win on the weekend.

The Mean Green claimed the first match 3-1. The ‘Runners jumped to an early 5-0 lead and maintained a seven-point lead, 9-2. UTSA was fueled by four kills to close in on the first set at 20-13. UNT regained their footing from three kills and two errors from UTSA to close the gap, 21-19. UTSA was unable to recover as UNT scored six uncontested points to claim the first set 20-25.

Trading points at the start of the second set, the ‘Runners used a 5-0 run to create a margin. The Mean Green responded with a 5-0 run of their own to tie the set 13-13. Two kills and an ace from UTSA gave them a 20-17 lead. Two UNT attack errors and two kills from Bianca Ejesieme sent the ‘Runners to a 25-21 set win.

Tied at 4-4 in the third set, the Mean Green used short scoring runs to remain ahead for the remainder of the set. Ejesieme led the team in kills with 13 for the match while Courtney Walters fueled the offense with 30 assists. UNT did not let up and claimed the set 25-15.

The final set of the first match saw three advantage changes. UTSA took a 5-3 lead before a three-point scoring run gave UNT an advantage they did not relinquish. A final 4-0 scoring run from the Mean Green gave them the 3-1 match advantage from a 25-19 fourth set win.

In the first set of the second match, UTSA caught an early 7-4 lead. Maintaining the advantage, a 6-0 scoring run late in the first set secured the win for the ‘Runners who finished the set 25-14.

The second set was a back-and-forth matchup. Tied at 10-10 and again at 15-15, a 7-2 scoring run late in the set gave the Mean Green the advantage to tie the match, winning the second set 25-21. A double-double performance from Hannah Lopez with 11 kills and 15 digs gave the offense a jumpstart to tally wins for the remaining sets.

The third set was tied at 10-10 before the ‘Runners claimed a five-point lead from an uncontested run. UNT responded with a 6-1 run off five kills to tie the set 19-19. Both teams traded kills before a kill from Lopez and a UNT service ace handed the set to UTSA, 25-22.

An 8-2 start to the fourth set gave UTSA the momentum to close the match. The Mean Green closed the scoring gap with a 5-0 run at 12-11, but the ‘Runners remained in the lead. A final 4-0 run powered by kills from Lopez, Ejesieme and Alison Jennings sent the ‘Runners to the 25 mark, 25-20, to claim the match 3-1.

UTSA will be back in action in the Convocation Center this weekend, Oct. 29-30 to host the UTEP Miners (16-5, 5-3 C-USA). The last home matches of the season will see the first set Friday at 6 p.m.