A visual act of revolution

2021 Texas Biennial "A New Landscape, A Possible of Horizon" at SAMA 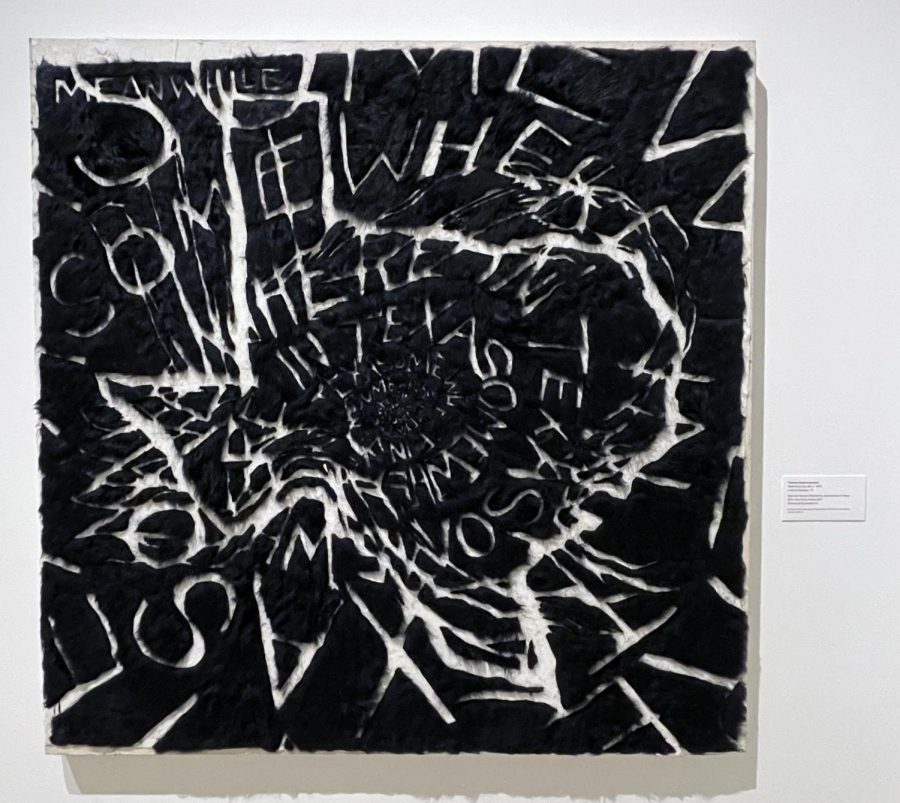 By itself, “A New Landscape, A Possible Horizon”  is enough to make any museum-goer uncomfortable in the comfort of this popular tourist spot: but the pride that radiates from its artists is not lost in the translation.

In the back left corner of a large white room at the San Antonio Museum of Art, Tomashi Jackson has installed a small TV set up with headphones connected to it. A young Black woman sitting in a bathroom symbolically reads to her children from Josef Albers’ “Vibrating Boundaries,” a piece on color theory and interaction. In the background, washed in with the color of a cyan painting, is the footage of the McKinney pool party altercation which occurred back in July of 2015 wherein two African-American teenage girls were violently wrestled to the ground by a white police officer with unnecessary ferocity. Portraits and pictures of the victims of police brutality are affixed beside the young woman on the wall next to her, a testament to the rising national concern for our own Black citizens against ingrained prejudice. Is it meant to make the viewer uncomfortable? Perhaps. Jackson has recreated, in spectacular detail, the unsettling discomfort of witnessing brutish violence against African-Americans all around the United States, but especially here in Texas.

Another exhibit, at the center of the room, is perhaps indicative of the oppression Mexicans face in Texas. A jewel-encrusted horse saddle floats in the middle of four columns and white sculpted hands and feet hang over a bed of soil from the saddle with cords of rope sagging between them. José Villalobos’ installation called “Los Pies Que Te Cargaron,” which translates from Spanish to “the feet that carried you,” demonstrates problematic machismo and the way that norteño culture in Texas has alienated queer, Latinx-Americans and anyone else that doesn’t fit the mold. Those who don’t conform to the conservative, traditionalist rules of north Mexican culture are ostracized, namely queer Latinx men who fail to meet the standards of masculinity and provide for a heteronormative household. Villalobos is just one of many who feel like they’re stuck in a hard place, between choosing to be themselves and choosing to be the support their families need.

Other installations at the exhibit include those by Trenton Doyle Hancock, Gregory Michael Carter, Colby Deal and other Texas natives from the Houston area. And for the first time since its inception in 2005, the exhibition is open to submissions from artists living elsewhere in the U.S. but with deep connections to Texas, as an avenue to open boundaries and explore perspectives on Texas culture.

The entire exhibit is a monument to not only the systemic suffering minority communities continue to experience throughout all of Texas, but also the pride and wherewithal of them to continue moving forward in these unprecedented times. The colorful lives of the artists at this exhibition have culminated in a beautiful display of culture and experience that lend to creating the reality of the world around us that we may not often see; a reality that seems to be inherently against minorities all of the time.

But some of us have that privilege; of turning off the TV, of stepping away from that reality, of changing out of that skin and living a life of opportunity and possibility. Something that some of our fellow colleagues and friends do not and will never have. It is a nightmare that some of us are able to wake up from and easily turn a blind eye to, in our inherent birthright. But for African-Americans, Latinx communities, and other minorities around the United States who experience systemic colorism, it is a neverending torment in a world built upon the inherent oppression of those without that privilege.

This expansive exhibition has been available all across south Texas since September and will go on through January of 2022. “A New Landscape, A Possible Horizon” is installed in five museums in San Antonio and Houston, including the San Antonio Museum of Art and the McNay Museum of Art, and has pieces from 51 different artists with all different kinds of backgrounds and connections to the Texas experience.