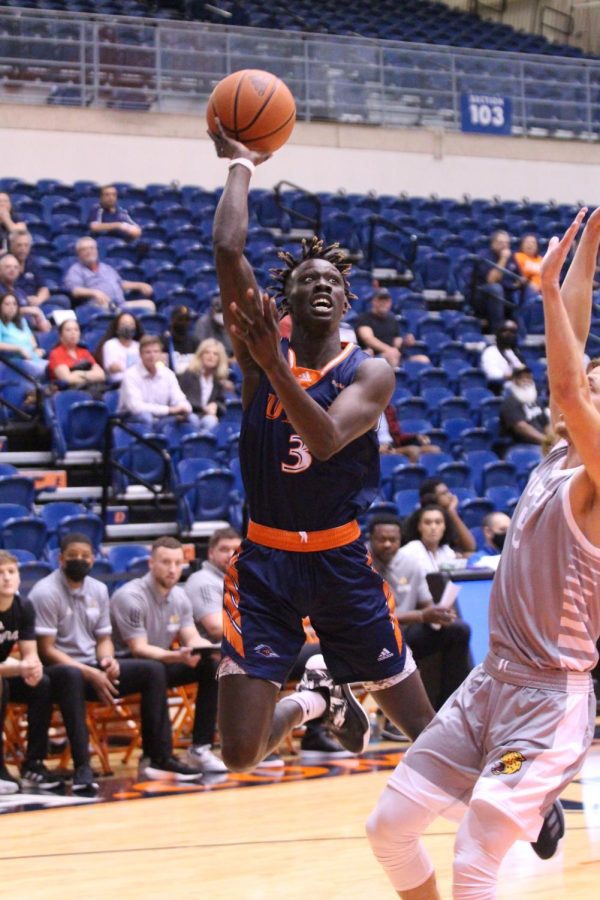 Dhieu Deing drives for a layup during the game against IUPUI earlier this season. Deing has gotten off to a great start for the 'Runners this year, averaging 16 points and 5.7 rebounds per game.

The UTSA men’s basketball team (4-3) has begun their season in full swing with a slate of home court games. The Roadrunners have hosted six consecutive games in the Convocation Center, including the 210 San Antonio Shootout which saw matchups between Texas A&M-Commerce, Texas A&M-Corpus Christi, Denver and IUPUI.

UTSA began the 210 San Antonio Shootout with a faceoff against the Texas A&M-Commerce Lions on Nov. 15. The Lions topped the ‘Runners in a three-point decision, 65-62, with a last second buzzer-beater from just inside the half court line. Both teams traded points to start the first half without a significant leader. A jumper from UTSA sophomore guard Jordan Ivy-Curry tied the game at 23-23. A pair of made free throws and a three-point shot from junior guard Dhieu Deing gave the ‘Runners a 31-29 advantage at the half. Three jumpers from Deing gave UTSA an early second half lead, 41-34. Keeping the Lions within a three-point deficit, UTSA held the lead until a TAMUC free throw tied the game at 54-54 with just over three minutes remaining. Ivy-Curry tied the game at 62-62 with four seconds left before a fast break three pointer saved the Lions from defeat.

The ‘Runners then faced the Denver Pioneers the following night, Nov. 16, for the first UTSA win of the Shootout. The ‘Runners took a double-digit lead for the game, fueled by a 27 point game performance from Ivy-Curry to top the Pioneers. A pair of free throws from junior center Jacob Germany and a 3-pointer from Ivy-Curry tied the game at 23-23. Maintaining the lead, double-digit points on the board from Deing and Germany helped the ‘Runners stay ahead 42-35 at the half. Keeping the Pioneers at a five-point deficit to start the second half, UTSA went on an 11-2 scoring run to lengthen their lead. Lachlan Bofinger led the defense, grabbing 11 boards against the Pioneers in the paint. Solidified by a layup from redshirt senior Cedrick Alley Jr., the ‘Runners closed the game ahead 78-64.

UTSA continued their home win record the following night, Nov. 17, with a close contest against the IUPUI Jaguars. Jumping ahead early, the Jaguars gained a quick 5-1 lead. Deing fueled the offense with a 20-point performance, grabbing five boards and snagging three steals. IUPUI held the lead going into halftime with a 33-28 advantage. A good 3-pointer from Deing kicked off the second half. With the help of a 15-point Germany game and a 14-rebound performance from Alley Jr., the ‘Runners took the lead with less than a minute remaining from a Deing jumper, 58-57.  A Jaguar foul with two seconds left sent Alley Jr. to the line to sink a 60-57 win for UTSA.

After a three-day break, UTSA welcomed the Texas A&M-Corpus Christi Islanders to the Convocation Center, Nov. 21. The Islanders jumped out with an early 8-0 lead. Ivy-Curry led the ‘Runners with 21 points. Deing followed with 11 and a team-high seven rebounds. UTSA closed the gap with a 3-point shot from Ivy-Curry to get them within four, 20-16. Unable to tie the game in the first half, the Islanders led 40-29 going into halftime. Chipping away the Islanders’ lead, the ‘Runners got within seven points of TAMUCC before the Islanders ran away with the lead, not allowing them within 10 points for the rest of the game, closing the 40-minute contest with a 77-58 win.

Coming off a loss, the ‘Runners redeemed themselves with a 79-73 win over the Lamar Cardinals, Nov. 24. A record-breaking performance for the ‘Runners with freshman guard Christian Tucker scoring a career high 12 points, redshirt senior forward Phoenix Ford tallying his first career 3-pointer and Deing shooting a season and career high 26 points. Trading points back and forth to start the first half, UTSA gained a 13-9 advantage. Keeping the Cardinals within range, UTSA held the lead for the first half, 35-28. Bofinger led the defense in the paint with five rebounds followed by Germany and Alley Jr. with four each. Continuing their leading performance, the ‘Runners did not let up the second half. Deing and Germany had double-digit second half performances with 14 and 11 points, respectively. Ivy-Curry and Alley Jr. contributed one steal each, and Tucker had nine points and two blocked shots to help the ‘Runners to a six-point win.

The ‘Runners hosted cross-town foe, St. Mary’s University last night, Monday, Nov. 29. The team will then travel to Phoenix, Ariz. Thursday, Dec. 2 to face the Grand Canyon University Antelopes. Continuing their road trip, the ‘Runners will then take on the Sam Houston State Bearkats on Saturday, Dec. 11 in Houston at the Toyota Center. The team will then return home to the Convocation Center to host the UTRGV Vaqueros on Friday, Dec. 17 for a 7 p.m. tipoff.