AOC visits San Antonio ahead of the 2022 primaries 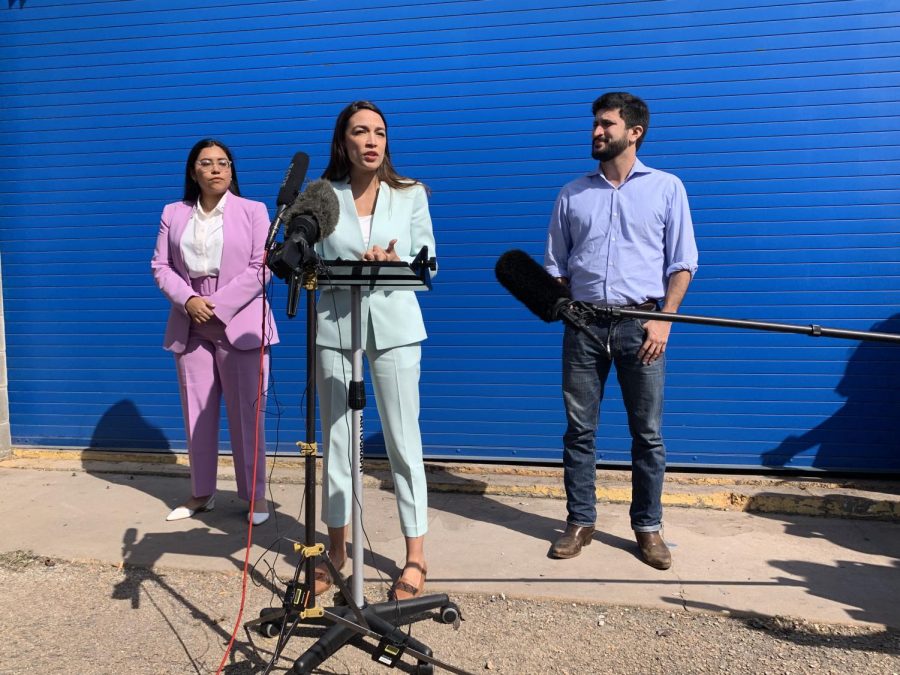 The event, which took place at Paper Tiger, began with the candidates delivering remarks and answering questions from the press.

Cuellar, Cisneros’ challenger, has been in office for nine terms. In the 2020 general election, Cisneros came close to beating Cuellar but fell short by only a few percentage points; however, the accomplishment was still impressive considering it was her first time challenging an incumbent Congressman.

Cisneros explained why this midterm election would be different from last time.

“What put us close to defeating Henry Cuellar was the kind of campaign we are running,” Cisneros said. “One of the things this campaign demonstrated that was different from last time is the political infrastructure we built from last time around was still there and that is why we came into this race with even more momentum than before. I am really excited to prove to folks that we don’t need corporate special interests, we can do this [by] running a grassroots campaign that is actually going to talk about policies that South Texas needs. That’s our strategy to win and that is what I am telling voters.”

Representative Cuellar identifies as a moderate Democrat but is considered one of the most Conservative in the caucus. Cisneros explained how she would respond to attacks from Cuellar about her association with Representative Ocasio-Cortez.

“The values that we are fighting for, that we all have in common are things that people want across the country,” Cisneros said. “We are fighting for healthcare, for good-paying jobs, for investment in our communities and those are the values we are talking about at their doors. I think if those values that Representative Ocasio-Cortez and these two campaigns are fighting for weren’t popular there wouldn’t be the crowd [that] there is outside.”

Casar, who served as an Austin city councilman, explained why he decided to run for Congress instead of staying in local politics where he appeared to thrive. He also stated the contributions he made while in office.

“We have to change things in Congress. I authored the Paid Sick Day law, which passed and helped protect millions in our state, and in the middle of the pandemic, the Supreme Court blocked paid sick time for working people,” Casar said. “Do we respond by just giving up? Or do we continue to build our movement, to go to Congress, and pass paid sick time for every Texan, and paid parental leave for every single American and a $15 an hour minimum wage.”

“When I stepped into my city council seat we found out city workers were making $7.25 and we doubled that to $15 an hour, but the legislature has blocked that from expanding to private employers. The way to go fix that is to go to Congress and override the legislature,” Casar added.

Cisneros and Casar were then joined by Ocasio-Cortez, who shared why she supported the two candidates.

“Greg Casar is a grassroots, homegrown champion for labor rights, immigrant rights and has helped lead the city of Austin into a progressive light,” Ocasio-Cortez said. “Jessica Cisneros has shown what is possible not just here in San Antonio, but all the way down in deep South Texas. She has shown that we don’t have to accept status quo politics before we start fighting for change. We are here to fight for living wages, Medicare for all, justice and dignity for our immigrant communities and so much more.”

Texas is considered a low voter state, especially during off-year elections. Ocasio-Cortez explained why she still gives her full support and confidence to Casar and Cisneros in spite of that.

“I ran in my first race in a notoriously low voter turnout community. We expanded overall turnout by 68%, we have been increasing turnout ever since. The funny thing about turnout is when you fight for people, they fight for you,” Ocasio-Cortez said. “Young people don’t see enough champions for them, people of color don’t see enough champions for them, so when people see women standing up, when people see marginalized communities, and people of color stand up for that, they feel inspired to turn out for those candidates. Jessica and Greg have the track record that they do resonate with voters.”

Ocasio-Cortez also gave encouragement to voters, organizers and candidates who feel burnt out and discouraged by the gridlocked political climate.

“Feeling burnout is completely normal and understandable. What is exciting about the state of Texas, and Jessica and Greg’s race, is if we flip Texas, we flip the country,” Ocasio-Cortez said.

“There is a lot in common between Texas and the community that I first ran in and the key was if we could get young people to turnout and organize that the numbers were already there, we just need to get them to the ballot box. If you are tired of seeing what is going on in Washington, cast your early ballot on Monday; if you are really excited, bring your friends and family members.”

“This is the battleground and it doesn’t take much, that’s the beautiful thing, you just have to show up. We convinced people in 2018 who were dispirited, tapped out and tired of even New York politics; we convinced them to show up on just that one day, Election Day,” Ocasio-Cortez continued. “That day helped usher in a lot of progressive candidates and now we have a caucus that is fighting, and we just need to make it a little bit bigger, but we are making this progress. There is a concentrated effort to stoke cynicism because they don’t want young people in the game, because if you are in the game you change it, if you are out of the game its business as usual, so that is really the message we are trying to send to folks.”

After talking to the press, candidates then spoke at a rally event that was open to the public. Cisneros started by talking about her family and the importance of investing in communities.

“I want to start off there because [my family is] the reason that I’m in front of you here today. They’re my ‘why’ as to why I’m organizing for a better future, because people like them, hardworking families in our district, in San Antonio, in TX-28, in TX-35, across the country, deserve investments. And we deserve someone who’s going to fight for our dreams as hard as we do every single day,” Cisneros said.

She talked about the importance of immigration laws and how they impacted her family’s experience, which was one of the reasons she decided to become an immigration lawyer.

Cisneros also recounted the first-hand experience of feeling fear in the air as DACA was under attack under the Trump administration.

“I was representing so many people that reminded me of myself and my family. And that the only difference between them and me was the fact that I was born in this country — that I just so happened to be born five minutes North of the river,” Cisneros said.

Cisneros then went on to describe everything that led up to her decision to run for Congress.

“I was 25 years old at that time, when I was approached to run. It was the scariest decision of my life, but honestly, the most rewarding one that I’ve taken because I decided to take that leap of faith and step up…and take on one of the most entrenched corporate politicians in America and almost won because of all of you,” Cisneros said.

Casar then took to the stage and emphasized the need to keep going despite trying circumstances.

“We’ve had people losing their jobs, their homes, their health care and even our loved ones. But you never gave up. We don’t quit. And we don’t quit because we know a better world is possible. We know that the world as it stands is not the world as [it] must be. And we know that progressive change is not just for some faraway place away from Texas, that it is rooted here in San Antonio,” Casar said. “And it’s this movement — us working together, not just me, not just Jessica, not just AOC but all of us together, organized. And that’s what’s gonna get us Medicare for all, and the Green New Deal and … immigration reform and closing … private prisons and ending student debt.”

Casar also explained that a lack of faith in government was just as much opposition as a candidate from the other party. He attributed this lack of faith to several factors, including policies of politicians like Governor Abbott.

“I started as a labor organizer. I decided to run for city council when I was 24 years old. And alongside so many of y’all, we went and knocked on doors and talked to people in the community. And what I found was that our greatest opposition wasn’t always the other candidate[s] or their corporate backers — that our greatest opposition was talking to people who had lost faith that this democracy would ever deliver for them,” Casar said.

“The answer is clear — that we are the majority … It is past time to organize that majority and deliver a democracy that works for us here in Texas. Working Texans deserve Progressive leaders who will fight and deliver on Medicare for all, union jobs, a Green New Deal, reproductive justice and a better Texas,” Casar concluded.

Ocasio-Cortez then got on stage and began by talking about the time she spent doing grassroots work in Texas and the impact it left on her.

“In those years, doing that work the absolute, indelible impression that was left on me, is that this state is gonna change the country,” Ocasio-Cortez said. “The reason it’s important to be here is because what you all are doing is different.”

Historically, Texas has been a red state. However, Ocasio-Cortez underscored that the state’s voting history is about to change.

Ocasio-Cortez also expressed her support for both the candidates and their work. While talking about Cisneros’ campaign, she also called out incumbent Cuellar for his “unacceptable” opinions on issues like reproductive rights as well as his role in stalling President Biden’s Build Back Better bill in Congress.

Finally, Ocasio-Cortez underscored the importance of electing officials that actually care about their constituents, a quality she argued incumbent Cuellar lacks.

“This is not just about Republicans and Democrats and blue and red…what this is about is electing representatives to Congress that actually give a damn,” Ocasio-Cortez said “How can we win when we send Democrats who don’t support child care or healthcare or immigrants or will [not] stand up for women and gender-expanding people. How can we win when we don’t stand for anything … Jessica Cisneros is someone who gives a damn. Jessica Cisneros is someone who stands for something.”