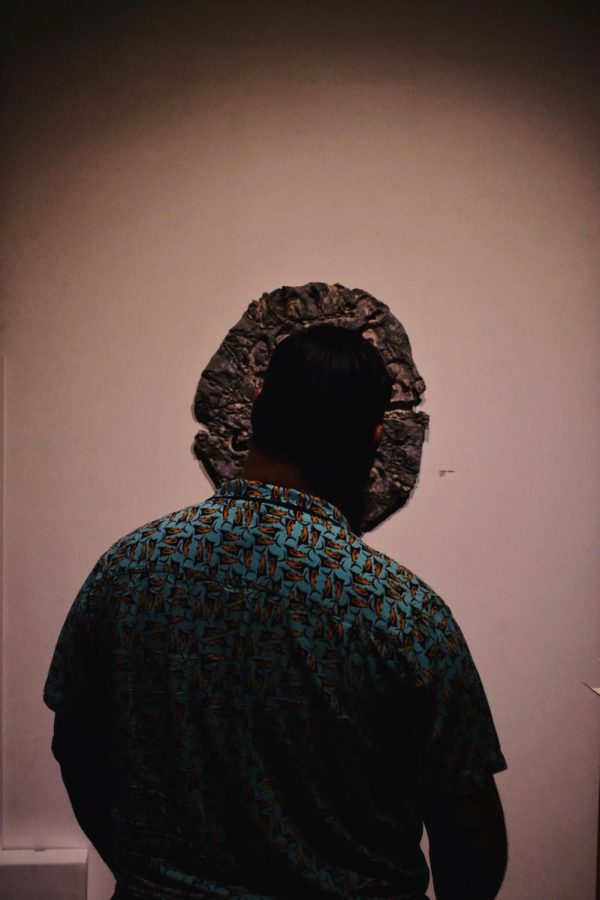 After retiring from the U.S. Army in 2015, Kristafur Addison decided to go to college and get his bachelor’s degree. He enrolled at the University of the Incarnate Word, where he planned to major in rehabilitative sciences — pre-athletic training track. Classes were going smoothly until he registered for a ceramics class. Suddenly, a passion for artistic expression took over his life. Addison’s ceramics professor noticed his potential and convinced him to change his major to art. Seven years later, Addison is showcasing his MFA Thesis, “Momentum,” to the public.

“Momentum” is an exhibition that represents the concept of motion itself; it seeks to freeze movement into a specific moment in time. Addison’s work is heavily inspired by artists like Peter Voulkos, Jackson Pollock, Paul Soldner, as well as Gutai, a Japanese art movement. All of these inspirations come together in Addison’s laissez-faire creative philosophy, which is to embrace chaos, spontaneity and personal instincts.

“Spontaneity is definitely part of my process. Some artists are very detailed. They draw out their design on a sketchbook. And they know almost what it’s going to look like from the onset. My work definitely does not follow that path. Like I said, I’m very intuitive in my relationship with the material. I kind of go off of what the material is telling me and what I feel in the moment,” Addison explained.

When it comes to his craft materials, Addison believes that creating art is ultimately a collaboration between the artist and the materials they use. “So, my creative process is very intuitive. Whether I’m working in ceramics or whatever, I develop a relationship with the material. I put my hands in the clay, put my hands on the wood and I allow the material to help guide me through the creative process almost in a very intuitive way. I let the material tell me what it wants me to do with it,” he described.

Addison finds a special solace in his creative process, “For me, the process of creating is probably more important to me mentally, physically and spiritually than the finished product. It’s therapeutic, and it’s good for both my heart and my mind. And so that process of putting my hands in it and creating it is super important to me.”

Like an artist splashing paint across a vast white canvas, Addison harnesses the power of spontaneity to work in his favor; except that instead of paint, he utilizes chains, rebars, metal rods and wooden logs to strike large slabs of clay that leave bold marks until they take an entirely new shape. His most notable piece, titled “Controlled Aggression/Mental Wellness,” is a large ceramic sculpture with countless holes and markings throughout. The sculpture is displayed alongside a video projection of Addison working on it in his studio. A clay cube is slowly being molded into something entirely new as Addison strategically moves the chains to strike the clay at specific angles.

“I think the video gives all these other pieces context. Without the video, you might just look at this piece of ceramic and not really understand him and you would never look at that piece down there on the pedestal and think that it started as a 12×12 block,” Addison remarked.

When Addison works, the materials don’t always behave in the way he wants them to, but he embraces the spontaneity that comes with creating art. Whether that’s while he strikes the clay, when he puts the clay through the firing process or when he arranges his log sculptures, he fully embraces whatever surprising physical changes occur during the arduous processes his pieces undergo.

“There is a sense of control aspect to it. I am making some decisions like where I want to hit the piece with a chain or where I want to throw the rock through. I have a general idea, but the chain or the rebar, the rock or the stick has its own energy and its own mind, it does its own thing,” Addison emphasized.

“Momentum” is a captivating exhibit that showcases great effort, strength and craftsmanship. Each piece plays with themes of nature, force, movement and physical and spiritual energy. Overall, the collection is an ode to the beauty found in the unexpected.

“Momentum” is currently on view in the UTSA Main Art Gallery until April 1. The gallery is open Thursday through Saturday from 10 a.m. to 3 p.m.