Student section lights up the Alamodome 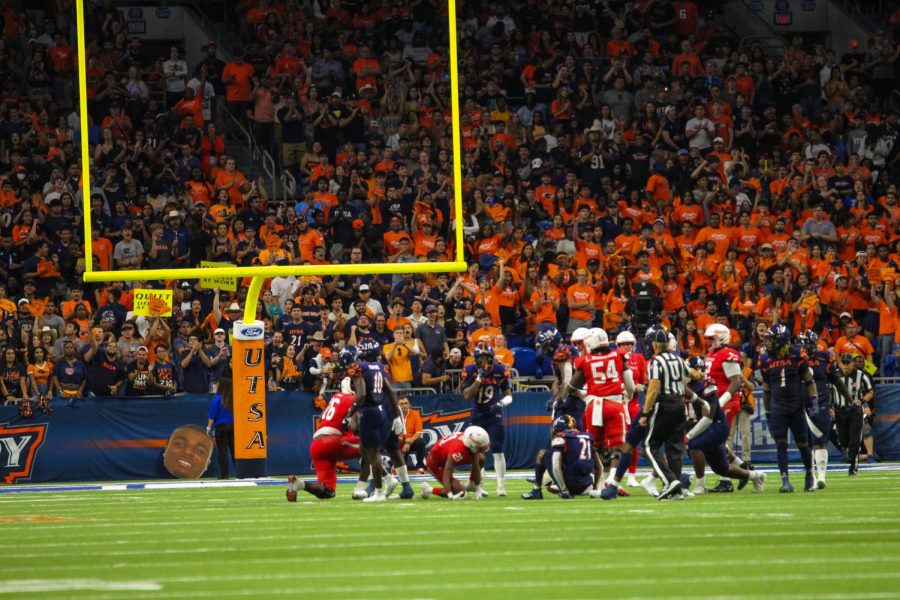 UTSA is said to have one of the best student sections in the state of Texas — and for good reason too. Student sections are not only discounted, reserved seats at the stadium and a fun activity to do on Saturdays, they are also the core of what makes a collegiate football game so exciting.

The crowd was in great spirits throughout the game against the University of Houston (UH). They energetically cheered on the players with chanting and screaming. The ‘Runners celebrated every small victory they possibly could. When the Houston Cougars fumbled and UTSA took the ball, the fans broke into cheer to animate the players. “Let’s go 210,” chanted the spectators in complete unison, demonstrating the strong sense of community that exists in the Roadrunner family.

Speaking of family, the members from the Lambda Chi Alpha fraternity showed support for one of their brothers, long snapper Caleb Cantrell. One of the members of the fraternity took it upon himself to rally and hype up the crowd. “UT,” “SA,” being the most effective chant along with the “Defense” chant. The brothers’ bond is just a small peek into the dynamic that makes UTSA’s student section so energetic.

But where there are highs, there are also lows. During a setback in the third quarter, there was a short-lived but evident sigh that left just as fast as the arrival of a scored touchdown. Students, alumni, friends and family quickly regained their enthusiasm for the team as they stood up to chant “Come and Get It,” bringing the Alamodome to life once again.

Though the fourth quarter of the game started with a touchdown by the Cougars, the Roadrunners did not let it discourage them from giving it their all. With UTSA taking Houston to triple overtime, making this home opener one to remember.

With a close score of 37-35, the UTSA Roadrunners showed that they are a team that does not give up easily, a characteristic that is shared with the fans.