UTSA rallies to beat Army in another overtime thriller 41-38 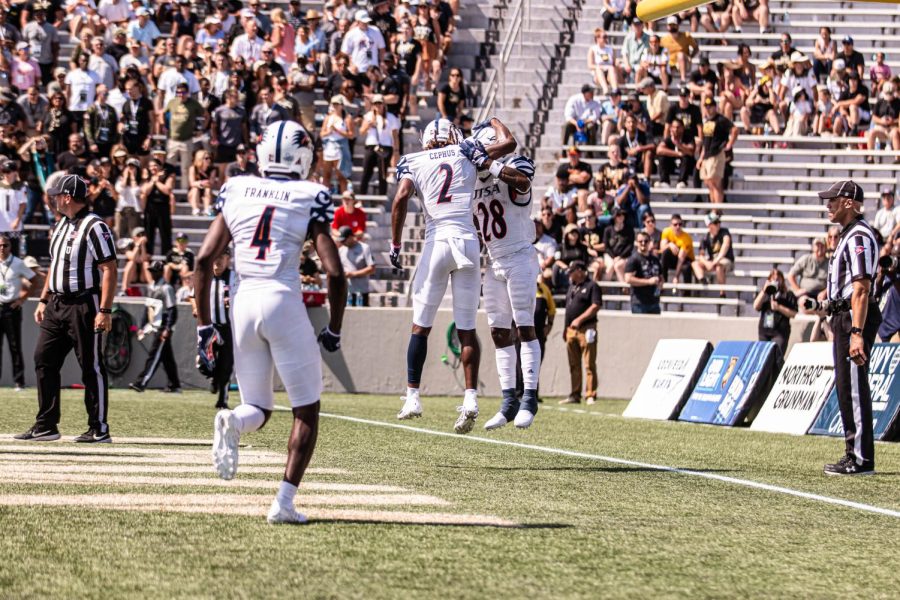 Zakhari Franklin, Joshua Cephus, and Trelon Smith celebrate in the endzone after a 1-yard touchdown run by Smith in the second quarter to tie the game 7-7.

After facing a devastating loss the week before to The University of Houston, UTSA (1-1) traveled to West Point to play the Army Black Knights (0-2) on Saturday, Sept. 10. Coming into this game, UTSA was 0-2 against Army, losing to them at home just two seasons ago. After being down as much as 14 points, quarterback Frank Harris led the team to an overtime victory to avenge their emotional loss from the week prior. “You’ll be amazed at how much they believe,” head coach Jeff Traylor said after the game.

UTSA started sluggishly in the first quarter, going completely scoreless and allowing Army to get on the scoreboard first, with quarterback Tyhier Tyler throwing a 77-yard touchdown pass to Ay’Juan Marshall to go up 7-0. The ‘Runners marched down the field midway through the second quarter and capitalized on a 1-yard touchdown run by Trelon Smith to even the score at seven. There were three touchdowns in the last five minutes of the quarter, with the Roadrunners tying the game 14-14 with a 29-yard touchdown pass from Harris to Zakhari Franklin. Army answered quickly with a touchdown of their own, going into halftime up 21-14.

The ‘Runners found themselves down 28-14 halfway through the third quarter, leaving Harris to lead another scoring drive and later complete another touchdown pass to Franklin. In the fourth quarter, UTSA had scored twice in three minutes: both from 1-yard touchdown runs by Brenden Brady. This had put the Roadrunners up 35-28. However, there was too much time left for the Black Knights. Quarterback Cade Ballard threw a 42-yard touchdown pass to Tyrell Robinson, tying the game at 35 and dragging UTSA to another overtime. Army had gone up 38-35 after a 28-yard field goal, giving the ‘Runners a chance to tie the game or win it with a touchdown. UTSA opted to secure the win, as Harris threw a 7-yard touchdown pass to De’Corian Clark, winning the game 41-38.

This win was huge for UTSA. The possibility of losing to Army and going down 0-2 for the season was high and would have forced the ‘Runners to try to earn their first win in Austin against the Longhorns the following week. However, the maturity and toughness of the team prevailed, led by fifth-year senior Frank Harris. “Keep on building from it. Learn from it. When we get down, we battle adversity. We are prepared for these types of moments,” said Harris when asked about how they have learned from the close games UTSA has found themselves in.

The Roadrunners will now test their strength against the historic Texas Longhorns (1-1). UTSA will play at 7:00 p.m., Saturday, Sept. 17, at the Darrell K. Royal Stadium.