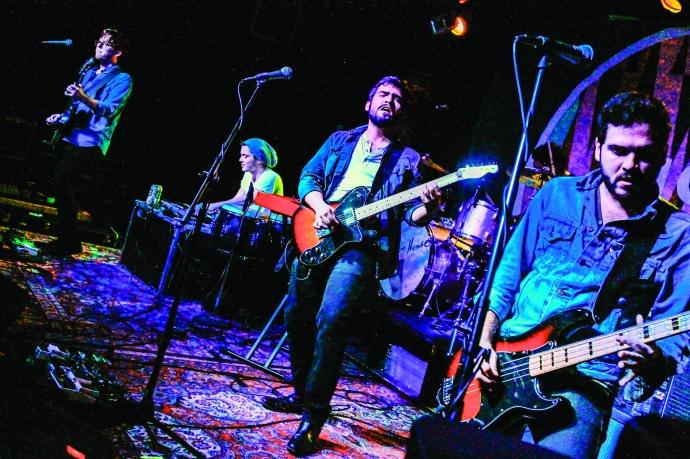 Minutes away from their show, the members of Hydra Melody mingle with guests, having a drink and making small talk. No sign of nerves, the band members are seasoned veterans when it comes to performing in their hometown.

Hailing from the streets of San Antonio’s music scene, Hydra Melody is making more than music across Texas — they’re making waves within the music community.

With a 2011 self-titled EP and a tour with Third Eye Blind under their belts, the band is ready for the spotlight. Their newest upcoming record, “Nocturna,” signals a new chapter in the band’s career: to grow as people and stay consistent in sound.

True to their name, Hydra Melody’s music can be described with one word: range. Within the realm of one song, the band can take you on an alternative indie rock roller coaster. Roaring with guitar riffs and drums can easily be slowed down to the lull of a bass guitar. You might hear bongos or piano now and then just to mix it up — a favorite of the band.

The mixture of different melodies paired with lead vocalist Jordan Berlanga’s raw voice gives the idea that Hydra Melody has something more to offer.

With so many different aspects in one band, it feels like it shouldn’t work, but the sounds all come together. Intrigued, you keep listening.

“When we started jamming back in high school, there was a lot of craziness going on. We were still learning how to be a band and play our instruments together,” Berlanga says.
“A lot of our music was just wild, and it was seven different melodies stacked on top of each other to make one, so ‘Hydra Melody’ just made a lot of sense at the time.”
Trying to find the right recipe for success, Hydra Melody has been a game of trial — and — error since high school

After a few changes in lineup, the band has evolved into the powerhouse it has today. Band members Jordan Berlanga (vocals/guitar/keys), Matt Gomez (drums), Manny Prince (percussion/congas/keys), Jason Harari (bass/vocals) and Taylor Ferguson (lead guitar/keys) have now been together for more than three years.

“We’ve kind of found a really unique lineup that we’re sticking with, and it’s been good since day one,” Gomez says.

With songs like “All to Yourself,” belting ultimatums like “You think that everything moves you / but I know that I can’t carry you anymore than you can carry yourself,” personal words hit home and make you ponder your own experiences whilst listening to Hydra Melody.

Gathering inspiration from real-life experiences is what the band does best and they feed off one another in the song writing process.

“We made the rule for ourselves — especially on this record (Nocturna) — that whatever the lyrical content is, it’s very honest and true to whatever we’ve been through,” Harari says. “So everyone was able to put in parts that they identified with. I think the message is just conveying whatever point we were at in our lives (at the time of recording).”

Even with their success and the band’s 2015 summer tour, Hydra Melody stays ambitious, explaining that they are still far from what they wish to accomplish yet.

Nashville, while eye-opening and filled with good experiences, drives the band for more. “I think setting the bar for ourselves the way we did in Nashville and being around all those different types of musical people steps your game up,” Prince says.

“It’d be a dream come true if we could all do nothing but this for the rest of our lives,” Gomez says. “But I think that the goal is to reach as many people as we can, for as long as we possibly can.”