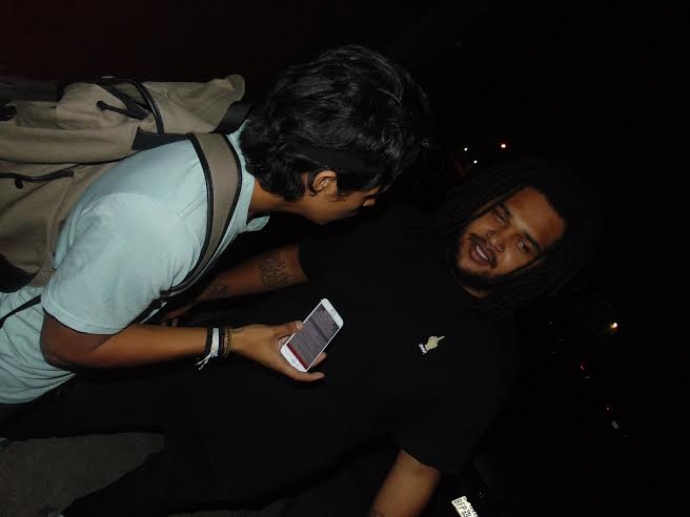 If you haven’t caught it yet, there is a new wave breezing over the Texas music scene and it is single-handedly taking over the game in a low key fashion. Robbie B, the Texas native rap pioneer, delivered a new vibe with his album “Somewhere In Texas”. In the midst of the misadventures and performances that we could not possibly recall, we caught up with the man responsible for the new wave somewhere in Texas. Robbie B and our FRIENDS spoke album content, new waves, identities, and what’s more to come from Robbie B. This is that new “Somewhere In Texas” with Robbie B:

Q: Over the course of the year, you’ve gone from opening up for Joey Fatts & MAXO KREAM on tour, to having MAXO features on your album. How’s that “next step” transition coming along?

A: it takes a lot of work, I make it seem easy but it is actually a lot of odds that need to be beat. You just have to finesse the game, finesse the world. Be where you need to be.

Q: Somewhere In Texas was a big Texas project for you. What was it like working with other Texas rappers like MAXO and G.U.N?

A: G.U.N. I’d like to call him my brother, yeah me and him are close. Me and MAXO, that’s my partner. Every time I see him, that’s what’s up, He’s busy and I’m busy, we all do our thing, but stay united on this Texas scene. Working with them is like working with any other rapper but you just depend on more listeners.

Q: What about working with Yung Simmie?

A: Yung Simmie’s cool. Shoutout to him.

Q: In your album, two of our FRIENDS’s favorites are “Talk” (which is a banger from start) and a much wavier “Make Up ft. Stazi”. Both of which are completely different styles. Is it wrong for us to say that there are two different Robbie B’s present in the album?

A: Nah that’s where there’s Robbie B and Steve Robbs. Whenever sh*t starts coming out that you wouldn’t expect to come out. That sh*t that people are scared to say— when that starts coming out, that’s Steve Robbs. When Robbie B starts looking around and caring for the world and being peaceful that’s Robbie B. He’s gonna be messed up most of the time, but that’s what it is.

Q: This new project consisted of nothing but new sounds and tunes we’ve never really heard. That’s that new wave we were talking about earlier. Can we expect more of those waves in the future?

A: Yeah most definitely. Shoutout to Ben Waid. He produced that beat. We made some songs in like fifteen minutes.

Q: The album was strictly made in Texas. What were some of the advantages and disadvantages of working an album strictly in Texas?

A: There’s none. They’re all advantages. Everybody and everything comes from Texas. To be able to be from Texas is a blessing in itself.

Q: Can you tell us more about the photo collection you are planning to release?

A: Right before I started doing all these shows, I got a polaroid camera, and I just went mad crazy with it. I’m real into the artistry so I got all my photographer homies to snap pictures. I’m just going to use all the snaps from my shows and all and make it a collection— and its coming out in October.

Q: The word is that there’s a new Robbie B project coming out in 2016. It’s a special project, however. Can you spoil some details?

A: I’m not going to use no computer effects. No computers, just real music. We’re going to use real instruments and get real orchestrated with it. It’s gonna be lit.

In the midst of the misadventures and performances that we could not possibly recall, we learned more “Somewhere In Texas” content and got in touch with the lucrative engineer behind the Texas wave. This was a FRIENDS and Robbie B exclusive, and remember: we are your FRIENDS.