Smoke-free campus? Not so much 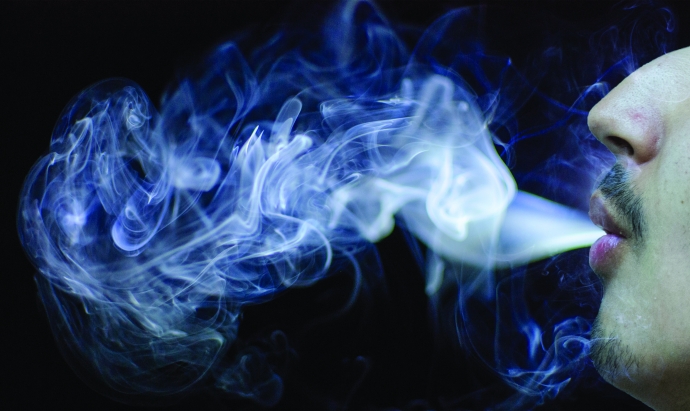 UTSA has been a tobacco-free campus since June 2014. While tobacco use is prohibited on campus, cigarette butts can be seen scattered directly outside the McKinney Humanities building and other various spots on campus.

According to UTSA Police Department Captain Dan Kiley, UTSA police do not issue citations for smoking on campus, but students can still face punishment for violating the tobacco policy.

Verbal warnings are given to violators, and if the prob- lem persists students may receive a behavioral refer- ral form requiring them to report to Student Conduct and Community Standards.

When asked his opinion on the current policy, senior multidisciplinary studies major Kevin Hijazi said he likes the idea of the policy, but thinks “They should have spots for [smoking].”

Hijazi went on to say that the tobacco ban is great for UTSA’s prestige, but be- lieves that UTSA fails to en- force the policy effectively.

tin Johnston described be- ing confronted on campus. Johnston explained one of his confrontations on campus, “I was sitting in my truck inside the garage, and I was having a cigarette and this lady came up and started knocking on my window and started tell- ing me I am not allowed to smoke on campus and have to leave campus.” Pena also said that stu- dents, faculty and police are responsible to in- form individuals of the campus policy when it is actively being violated. “I have had two teachers and a maintenance worker tell me to stop smoking, but not here [outside the McKinney Humanities]. Here, I’ve never had the cops talk to me,” en- trepreneurship junior John Whitaker said. Prior to the current pol- icy, tobacco usage was al- lowed on campus. During

the one year transitional pe- riod to the total ban, smok- ing and tobacco usage was allowed in designated areas.

“I do remember seeing a lot more little smok- ing areas, and it was more sparse, so I think now in- stead of a bunch of little spots, you get just one big one, “ Whitaker said.

Cigarettes are not the only form of tobacco used in violation of the campus’ tobacco-free policy. UTSA’s policy prohibits tobacco in all forms, including the use of electronic cigarettes.

“The anti-smoking/to- bacco policy has limited most people, but I think most people still don’t care,” sophomore business major Mark Rodkey said. “Smok- ing is a habit because the chemicals inside are ad- dictive. People who smoke a lot a day can’t really de- cide when it’s appropriate to go smoke or not, so I don’t think it is necessar-

ily right to impose a ban.” Rodkey also addressed vaping on campus. “Some people are not respect- ful about it and will blow smoke in someone else’s face or not make any at- tempt to conceal [vapor- izers] and may not adhere to another person’s wish that he or she put [vapor- izers] away, but for the most part it is not like that.” According to Title 25 of the Texas Adminis- trative Code, UTSA is a CPRIT-funded entity. As part of being a mem- ber of this entity, institu- tions are required to “Pro- hibit the use of all tobacco products by all employees and visitors to the property owned, operated, leased, occupied, or controlled by the CPRIT-funded entity.” UTSA has received $1,471,121 from the Can- cer Prevention and Re- search Institute of Texas (CPRIT) after adjusting the

tobacco policy to its cur- rent rules and regulations to meet CPRIT standards.

UTSA is one of many schools across the na- tion that has adopted a tobacco-free policy.

CPRIT has also pro- vided grants to other Texas universities includ- ing other UT branches. More than 600 college and university campus- es in the United States have smoke-free or to- bacco-free campuses.