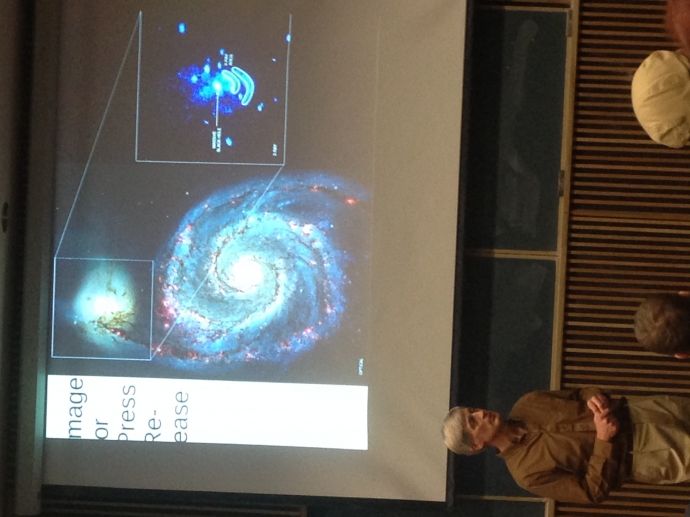 Hosted by Vaughan Family Professor of Physics, Dr. Eric Schlegel, the event consisted of a lecture, followed by stargazing using telescopes placed on the fourth floor of the Flawn Sciences Building. There have been several of these events, with brief and easy to understand lectures, covering various astronomical phenomena such as comets, climate change and Coronal Mass Ejections (CMEs).

This most recent lecture covered material from Dr. Schlegel’s recent paper, “NGC 5195: Feedback ‘Burps’ after a Massive Meal?—Why All the Fuss?” The paper discussed the implications of recent observations of the galaxy NGC 5194 (colloquially known as the Whirlpool Galaxy).

According to the data, there appears to be large, asymmetrical waves of hydrogen gas flowing outward from the center of the small, neighboring galaxy NGC 5195. Astronomers have yet to determine the exact cause of this phenomenon.

Dr. Schlegel listed a few hypotheses, but focused primarily on an idea called “feedback.” To support this hypothesis, Dr. Schlegel used data from the Chandra X-ray Observatory, which shows flares of X-rays behind the waves of hydrogen gas.

These flares, which are likely being emitted by the supermassive black hole in the center of NGC 5195, could be energetic enough to forcibly push these massive clouds of hydrogen like a snowplow pushes snow.

If Dr. Schlegel and his colleagues are correct in that feedback from the supermassive black hole is inducing the dispersal of material, it could help answer one of astronomy’s biggest puzzles: how to stop star formation. In observations of nearly every galaxy, wherever stars appear blue, it is indicative of a greater amount of raw material available to coalesce into stars; where there’s more material, stars are typically larger, hotter and bluer.

Conversely, in areas where there are less material available for star formation, stars are smaller, cooler and redder. What puzzles astronomers is most galaxies appear bluer near the outer “arms” and redder near the center; one would expect the opposite, with more material and therefore bluer stars near the center.

“It’s been a puzzle, (and) it’s still a puzzle,” declared Dr. Schlegel, but his work could help solve this mystery: perhaps the supermassive black holes in the center of most galaxies are emitting vast gusts of X-rays, enough to push gases outward, inducing star formation in the spiral arms, while simultaneously slowing or stopping it near the center.

Following the lecture, visitors were encouraged to use the telescopes in the Curtis Vaughan Observatory, on the fourth floor of the Flawn Sciences Building.

Through the telescopes, visitors could see several celestial structures, such as the Orion Nebula, one of the many large gas clouds in the Milky Way where new stars are born.

For those who enjoy learning about space and stargazing, the event is free, open to everyone and occurs every third Friday of the month.