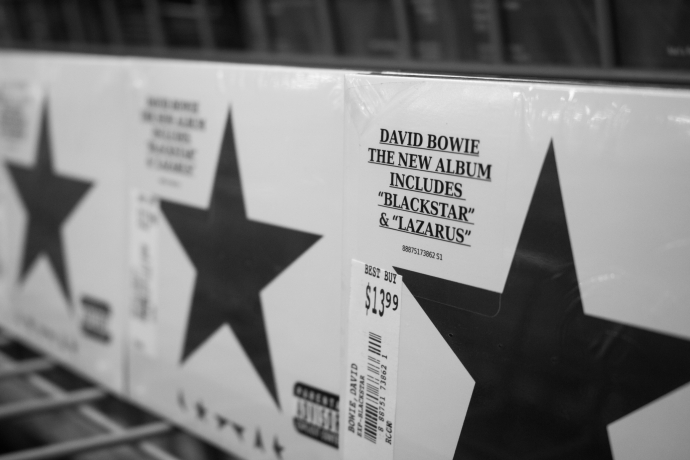 “Look up here, I’m in heaven/ I’ve got scars that can’t be seen,” starts “Lazarus,” the third track from David Bowie’s most recent and final album, “Blackstar.”

Released two days before his death, “Blackstar” is a very personal requiem of discordant jazz and haunting lyrics that captures Bowie’s legacy perfectly.

The seven-track album sends you through a cacophony of violin, saxophone, and guitar that almost breaks down into a clamor until it is tied together by Bowie’s voice. Admittedly, “Blackstar” is a whisper compared to his earlier work, yet it seems much more impactful being his last studio album.

The title track launches the album into multi-movement instrumentation of hypnotic violin and chilling vocals, transitioning into a bright ballad of poetry and nostalgia that can satisfy any Bowie fan. In contrast, the appropriately named “Lazarus” pulls in heavy guitar riffs mixed with soulful saxophone that crescendos into Bowie’s cry of resurrection.

Listening to the song, you can’t help but feel Bowie’s singing from beyond the grave.

The whole album feels almost too personal, too intimate, but therein lies the genius of Bowie; the power to be able to move from eerie, to solemn, to a bittersweet statement on death.

The last track, “I Can’t Give Everything Away,” echoes Bowie’s last message to the world, breaking down into a powerful guitar solo that reminds you even at the edge of death Bowie still had more artistry to give to the world.

“Blackstar” is very different from any of Bowie’s previous albums. The experimental album in many ways captures his legacy and his continued relevancy, but also stands as a personal narrative of death and musical permanence that encapsulates the saying “life imitates art”.

“Blackstar” can be a challenging listen because of its overt experimentation and dour mood.

However, Bowie was always known for pushing the threshold of music and entertainment which allowed for other artists to follow in his footsteps­—and this album is no different in that regard.

Instead of retreading the same old ground, Bowie proved his ability to innovate even after his nearly 50 years in the music business. Going back to listen to classics like “Space Oddity,” “Moonage Daydream,” and “Heroes” makes you further appreciate how much of an icon the man really was.

“Blackstar” gives a firsthand account of Bowie’s battle with death and his coming to terms with mortality. This doesn’t diminish his death, but instead is a touching tribute to his life and legacy.

“Blackstar” sticks out in Bowie’s discography, with an ambience usually reserved for film, shaped by odd chord variations, burblings of electronica and sudden interjections of strange sound effects.

It feels as bold and weird as anything in Bowie’s back catalogue, delighting some and maddening others.